Science the Shit Out of Exposition 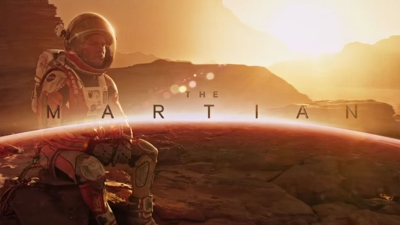 THE MARTIAN began life as a serialized novel by software engineer Andy Weir, uploaded to his personal website chapter by chapter in 2009. Dense with heavily researched science, the work quickly attracted other science geeks whose feedback helped tighten its scientific accuracy through crowd fact-checking. Even so, Weir knew hard science alone would not make for an interesting story, so he gave The Martian a gripping Apollo 13-meets-Cast Away plot and infused his main character with a winning, smart-alecky personality.

Fans demanded a downloadable version of the full manuscript, so the author made a Kindle version available on Amazon for just 99 cents (at the time). That edition is said to have sold over 35,000 copies in three months, outpacing free downloads on Weir’s website and catching the attention of a literary agent. A traditional publishing deal soon followed. A movie sale came just four days later, changing the programmer's life overnight.

Screenwriter Drew Goddard (Cabin in the Woods, World War Z, Lost) said at a recent Q&A that the key to adapting the book was its first four words: “I’m pretty much fucked.” 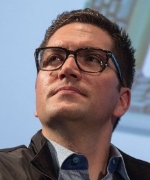 This is how astronaut Mark Watney (Matt Damon) sums up his situation when he finds himself stranded on Mars. It’s also pretty much how the story’s structure operates. The protagonist is stuck on a planet with no breathable air and only enough food to last a few months. His situation is always dire. Every time he overcomes one obstacle, he faces a new problem he must solve. He’s always “fucked,” but only “pretty much,” because he has the heroic quality of scientific ingenuity to clear his hurdles. Thus each scene of the screenplay advances the survivalist one small step, while pushing him back one giant leap, sending him right back to pretty-much-fucked status.

The biggest challenge the screenwriter faced, however, was how to deliver a spaceship full of the hard sci-tech exposition that made the book a “love letter to science” in a medium built upon visuals and emotion for a mass audience that mostly doesn’t have a master’s degree in physics from MIT. Fortunately, the novel’s tone already solved that problem.

The epistolary novel is mostly a series of Watney’s first-person mission log entries. The narrative voice strikes a balance between scientific authenticity and a more relatable regular-guy sarcasm. The film turns the logs into video logs, avoiding traditional voiceover by giving Damon someone to talk to and essentially making us the invisible “Wilson” of the picture. 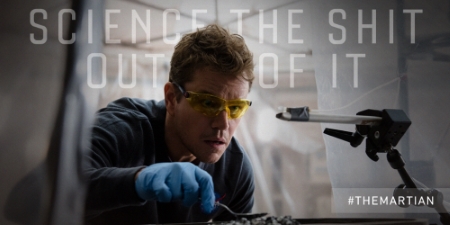 For every expository line necessary for us to understand the next plot point, Goddard took care to have it delivered in way, or followed up with a reaction, that carried some element of humor. For example, after explaining precisely how, in one instance, the math leaves him pretty much fucked, Watney remarks, “So, in the face of overwhelming odds, I’m left with only one option: I’m gonna have to science the shit out of this.”

This line hides the key to getting away with exposition in dialogue in those situations where a dry info dump is absolutely necessary. The science itself is the exposition. The act of twisting it from a noun to a verb and then using that to further twist the shit out of a common expression turns the entire “lecture” into a memorable laugh, aiding our comprehension and retention of that shit-strained science. When it comes to exposition, a good joke is like the proverbial spoonful of sugar. Goddard applied this technique so effectively throughout the exposition-heavy screenplay that the Hollywood Foreign Press Association has mistakenly nominated this dramatic adventure film in its comedy category.

SCREENWRITING TIP: Challenge your hero, show him rising to the challenge, then throw a new obstacle at him. Rinse and repeat.

SCREENWRITING TIP: When it comes to important but dry and boring exposition, a good joke can work like the proverbial spoonful of sugar that helps the medicine go down. 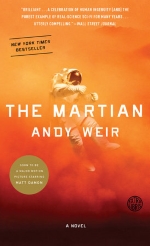 Posted by scriptipps at 6:30 PM No comments: