LOGLINE - A man struggles to regain his independence after being kidnapped and sold into slavery.

WHO WROTE IT - Born in New York in 1808 the son of a freed slave, violinist Solomon Northrup was kidnapped by slave traders in 1841 while following a bogus lead on a job offer in Washington, D.C. After twelve years of bondage, he was finally able to get word of his whereabouts to his family, who were then able to help free him.

A year after returning home, Northrup wrote his memoir, Twelve Years a Slave, with the help of David Wilson, a New York legislator. Following the success of Harriet Beecher Stowe’s Uncle Tom’s Cabin a year earlier, Northrup’s book became a bestseller.
Screenwriter John Ridley met Steve McQueen at a screening of the British director’s first film, Hunger. They were both interested in making a film about slavery and began tossing ideas back and forth until McQueen’s wife discovered Northrup’s book.

Ridley began his screenwriting career in television sitcoms such as Martin and The Fresh Prince of Bel-Air. In 1997, he published his first novel, Stray Dogs, and adapted it for the screen as U-Turn for acclaimed director Oliver Stone.

His spec script Spoils of War was turned into Three Kings by David O. Russell (nominated this year for directing and co-writing American Hustle). Kings starred Spike Jonze, who is nominated against Russell in the Original Screenplay category for Her.

Prior to 12 Years a Slave, Ridley was best known for writing and producing the 2002 blaxploitation spoof Undercover Brother.
During the 2007 writers strike, Ridley publicly denounced the WGA’s handling of the negotiations and left the union. As a result, his work on the 12 Years a Slave screenplay was ineligible for a WGA award. A man of principle, Ridley agreed to forgo payment in addition to the coveted WGA gong, working on the script for four years on spec (ie, for free).

THE TITLE IS A SPOILER - In the first act of 12 Years a Slave, the protagonist experiences an “unfair injury,” instantly making him a sympathetic hero. The inciting incident forces him on a journey. Everything about the setup is classic storytelling.

The story is somewhat episodic, passing the antagonist duties that first lie with the kidnappers from one owner to the next, always with increasing cruelty. While the institution of slavery is the main antagonist, it is personified as a villain primarily in Epps (Michael Fassbender), the meanest of Northrup’s taskmasters.

Like the hero in Captain Phillips (also based on a true story and also nominated for Best Adapted Screenplay), Northrup is incapable of actively participating in his salvation, lest he become Django, the protagonist of last year’s Best Original Screenplay winner. Instead, his heroism comes from his perseverance; eventually he finds the chance to convince one of the executive producers to solve his problem.

The movie is told entirely from Northrup’s point of view, but Northrup wasn’t directly involved the aftermath of whatever happened when his family found out where he was. While we do get to witness his triumphant homecoming, the machinations of his release occur off screen. And since we know from the title that his captivity lasts exactly twelve years, the film's “ticking clock” works to diffuse the tension of the hero's plight rather than build it up.

THE TITLE IS ALSO MISSPELLED - The book spells out the number twelve in its title. The screenplay uses the numeral 12. In his Q&A podcast, journalist Jeff Goldsmith asked Ridley about the discrepancy.

“Everything that I learned, and someone feel free to correct me, that up to ten, if it is the first word of a sentence it is spelled out, up to ten, right?” the Oscar-nominated screenwriter asked.

Not quite. He's mixing up two separate rules. Style guides differ about the over-ten rule in the middle of a sentence. But almost all style guides say numbers must be spelled out when they are the first word in a sentence, even if they are ridiculously long numbers, in which case they recommend rephrasing the sentence.

WILL IT WIN - 12 Years a Slave scooped up top prizes at the Golden Globes, BAFTA, and Critics’ Choice Awards, and tied with Gravity at the Producers Guild Awards. It garnered nine total Oscar nominations, the second only to Gravity and American Hustle, which tied for first place with ten apiece. They are in a three-way battle for most statuettes. 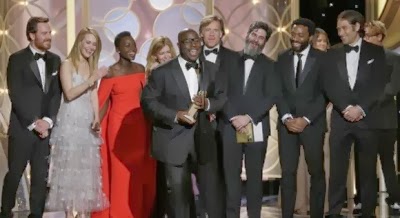 In the screenplay races, Slave lost to Her at the Globes, where they combine adaptations with originals, and took a surprise hit at the BAFTAs from Philomena, and, of course, was left out of the WGA heat altogether. But Ridley did pick up a cool dozen trophies from various critics awards, including the Broadcast Critics’ Association, as well as the prestigious USC Scripter Award.

American Hustle and Her may be running neck-and-neck on the original side, but Slave seems to have a strong lead to claim Best Adapted Screenplay along with its expected Best Picture and Supporting Actress wins. The most likely script to pull an upset here is Philomena, which appeals to the Academy's older voters and still addresses a social injustice.

The script for 12 Years a Slave is also nominated for Best Screenplay Based on a True Story in the inaugural ScripTipps Screenplay Awards, which you can vote in for free up until Friday night. (Click here)

WHAT’S NEXT FOR THE FIRST-TIME OSCAR-NOMINATED SCREENWRITER - John Ridley made his directorial debut with the Jimi Hendrix biopic All Is by My Side, due in theatres this May. He was also hired by MGM to rewrite a remake of Ben-Hur and last month received a pilot order from ABC for a crime drama series he created called American Crime.

This is Part 10 of our ten-part series of profiles on this year’s Oscar-nominated screenplays.

Posted by scriptipps at 3:30 PM