I Was Never The Same Again After That Voiceover 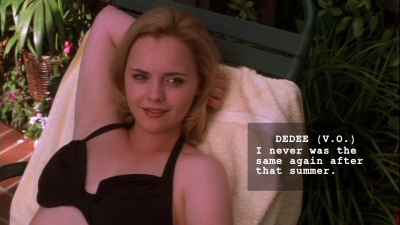 “If you’re one of those people who don’t like movies where some person you can’t see talks the whole time and covers up all the holes in the plot and at the end says, ‘I was never the same again after that summer,’ or whatever, like it was so deep they can’t stand it, then you’re out of luck. Things get very complicated here very quick. And my guess is you’re not gonna be up to it without me talking.”

Those are the first words in The Opposite Of Sex. In case you haven’t heard, voiceover narration is considered a no-no for new writers. Why? Because, as Dedee Truitt (Christina Ricci) tells us in the above quote, it’s a cliché and even audiences know it’s a way for lazy screenwriters to cheat. Writer/director Don Roos brilliantly got around that by making his narrator aware of the problem and having her explain to us, in voiceover, exactly why she doesn’t give a shit.

Movies from Clueless to Limitless have proven the use of voiceover (VO) does not make you less of a screenwriter. How else would the hacks who wrote Juno, American Beauty, and The Descendants end up with shiny gold statuettes from the motion picture academy on their mantles? But before deciding whether to add narration to your script, it's best to understand the different ways VO is used in movies. 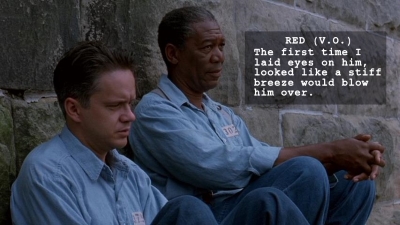 By far, VO is used most often and most effectively in screenplays adapted from novels that were written in first person. This allows the movie to retain the book’s original tone, often using chunks of the book’s prose verbatim. It’s handy for that literary “inner dialogue” we don’t normally have the luxury of using in screenwriting.  In such adaptations, VO is typically used throughout the entire movie and is particularly effective when the narrator is a character with a distinct voice. Classic examples include Fight Club, A Clockwork Orange, and The Shawshank Redemption.

In most other cases, VO tends to be used heavily in the first act to help set up the backstory, becomes less frequent or dropped altogether in Act 2, then comes back at the very end of the movie to express the movie’s theme. At the end of Eve’s Bayou, for example, adult Eve says, “Memory is a selection of images, some elusive, others printed indelibly on the brain.” American Beauty is another theme-driven bookend example. In many cases, these bookends are narrated by adult versions of a young character, such as in Chocolat and Stand By Me (also both adapted from first-person novels).

If the narrator is a supporting character (Frances, The Shawshank Redemption), the VO usually doesn’t start until that character first appears on screen. Otherwise, VO is normally introduced as soon as possible to establish its presence. 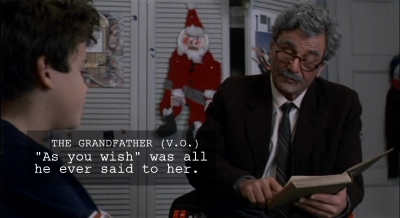 A common narrative technique is to start with a character telling a story to another character, then transitioning into the story being told, thus allowing the narration to continue as needed in VO. Examples: Big Fish, The Princess Bride, The War Of The Roses, Amadeus. This technique cross-cuts between an A-story (the story being told) and a B-story (the telling of the story). Old Rose (Gloria Stuart) tells the story of Titanic in this fashion, but it’s interesting to note that a number of VO passages and present-day sequences that were written and shot for the second half of the movie ended up on the cutting room floor because they broke the momentum of the ship sinking.

Occasionally, the A-story catches up with the B-story, which then takes over without narration. In Forrest Gump, Forrest sits at a bus stop telling his life story to a succession of strangers until he reaches the point where he tells them why he’s at the bus stop. (In this case, the VO does return later for a montage, no longer having a logical explanation of who Forrest is talking to. Oops.)

A variation of the story-within-the-movie voiceover is when a character turns to us and narrates on-screen, breaking the fourth wall, as in two recent financial comedies, The Wolf of Wall Street and the Oscar winning screenplay The Big Short. Jack, the otherwise “unnamed” narrator/protagonist of Fight Club, does this too when he’s explaining reel changeover marks; the fact that Tyler breaks the fourth wall with him in this scene should tell us something.

A special kind of narrator is the unreliable narrator (though this term is not used exclusively for voiceover narration -- Bruce Willis’s character in The Sixth Sense is an unreliable point-of-view protagonist who does not narrate in VO). In Billy Ray’s Shattered Glass, the narration comes from a lecture being given to a classroom full of students, but when we learn the narrator is a big, fat liar, we also learn that classroom is empty and its students existed only in his mind.

The narrator can also be dead, as in Sunset Blvd., American Beauty and The Lovely Bones. Note that in all three of these, they tell us their fate up front.

Sometimes, as in The Opposite Of Sex, VO is directed to the audience, self-aware that it is part of a movie. (“This part where I take the gun is like, duh, important. If you’re smart, you’ll remember it.”) Another example: American Beauty (“Look at me jerking off while I listen to country music. Funny thing is, this is the high point of my day.”) This tends to be used for comedic effect.

Then, of course, there’s 1940s film noir, virtually definable by its stylized use of VO by the hard boiled detective, which is unique to the genre and not used much anymore, unless deliberately trying to evoke that particular mood, as in Marvel’s Jessica Jones. Christopher Nolan’s Memento also played around with this a little.

Also archaic in film today is the omniscient third-person narrator who is not a character in the story, as in biblical epics like The Ten Commandments, or the newsreels in Citizen Kane. Save this for History Channel documentaries. Although less bombastically godlike, Little Children used a detached, third-person narration that killed this otherwise very good 2006 film for many viewers.

One reason VO gets a bad rap is its frequent use as a Band-Aid to fix problems after the fact. A scene or whole subplot may end up getting cut, leaving a plot hole that needs to be filled in. That’s easier to do in movies where the audience is already used to listening to a narrator. In other cases, the same type of fix is regularly achieved by looping a new line of dialogue into a shot where the actor’s lips happen to not be visible (an over-the-shoulder shot on another actor, for instance).

But try to add VO in post-production to an entire movie for which it was never originally planned and it may backfire. Ridley Scott, for example, was infamously, and controversially, forced to add narration to Blade Runner when his initial cut proved too confusing for test audiences. Fans of the cult dystopian thriller would ultimately reject Harrison Ford’s studio-imposed VO when Scott released various director’s cuts without it decades later.

Although voiceover is easy to keep rewriting as needed after principal photography has wrapped, if used at all it is generally most successful when it is planned ahead of time and chosen for a reason other than being lazy about how to get across some exposition. Understanding the different ways VO is used well will serve screenwriters better than just listening to the fictionalized version of screenwriter Robert McKee advising, in Charlie Kaufman’s Adaptation, “...and God help you if you use voiceover in your work, my friends.”

(A version of this post was first published on Five Sprockets on January 11, 2010. For more on effective use of voiceover in screenwriting, see ScripTipps: The Descendants, ScripTipps: The Fault in Our Stars, and ScripTipps: Waitress.)

Posted by scriptipps at 10:00 PM No comments: