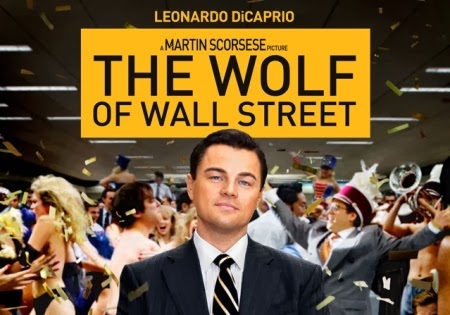 WHO THE FUCK WROTE THIS FUCKING SHIT - The Wolf of Wall Street is based on the memoir of its main character, Jordan Belfort. In 1998, Belfort was sent to prison for defrauding investors of nearly $200 million. During his 22-month stay behind bars, he shared a cell with stoner comic Tommy Chong, who says he coached Belfort on how to write about his exploits in not one, but two, best-selling books.
Belfort sold the film rights to his first book to Leonardo DiCaprio, who beat out Brad Pitt in a bidding war, to the tune of $1 million. The success of the film has upped Belfort’s speaking engagement fees and he is now reportedly shopping a reality show. The unreliable narrator claims all proceeds will go to paying back his fraud victims.

Emmy-award-winning The Sopranos writer/producer Terence Winter had been working in the legal department at Merrill Lynch on 1987’s Black Monday, the same day and just a quarter-mile away from where the film begins. He began developing the Wolf screenplay adaptation with DiCaprio and director Martin Scorsese in 2007.
Unable to secure a studio greenlight, Scorsese left the project to work on Shutter Island, but not before hiring Winter to create the HBO series Boardwalk Empire, which Scorsese was executive producing. Some of Winter’s pre-Sopranos TV writing credits include Flipper, Xena: Warrior Princess, and The Cosby Mysteries. His wife, Rachel Winter, is also nominated this year for her first Academy Award as a producer on Dallas Buyers Club, which is up for Best Picture as well as Best Original Screenplay.

THE FUCKING PROTAGONIST - Some critics have accused the film of glorifying a criminal. Winter told The Boston Globe he’d made “a conscious choice to not show the people on the other side of that phone. By design, you the viewer are taking the place of the people being duped by what these guys are doing and being seduced by them.”

Apparently, the writer’s goal was to help us understand by proxy how ordinary investors were charmed out of their life savings, then make us laugh at our own stupidity along with the hedonistic crooks pissing away our life savings on whores shoving candles up their butts, and then finally remind us that, yes, they really are bad guys, and then, for good measure, rub our faces in the light punishment given to Belfort.
Another approach to the cautionary tale of Stratton Oakmont might be a completely fictionalized account from the point of view of an impressionable trainee stock broker who gets sucked into the world of selling worthless stocks for higher-than-legal commissions but struggles with his conscious when he realizes he’s hurting people.

The lesser-known film included enough sex and drugs and fast cars to get the point across that the brokers’ windfalls were being spent on sex and drugs and fast cars, then moved on to send the hero on a journey. In short, Boiler Room told a story, whereas The Wolf of Wall Street recreated events. And Boiler Room did it with two-fifths fewer occurrences of the F-word per minute. (Scorsese is executive-producing Younger's next project, Bleed for This, starring Aaron Eckhart and Miles Teller.)

WILL THE WOLF WIN A FUCKING OSCAR TO TAKE HOME AND SHOVE UP ITS FUCKING BUTT - One elderly Oscar voter from the screenwriters branch of the Academy reportedly shouted, “Shame on you!” at Scorsese while her friend, 75-year-old actress Hope Holiday concurred, calling the movie “three hours of torture.” That’s two votes that won’t be going to The Wolf of Wall Street. 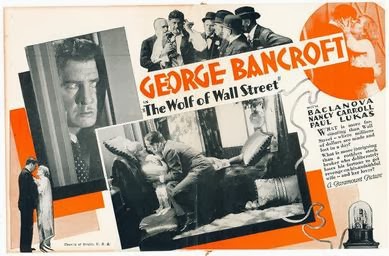 The Academy has always been a little iffy with Scorsese. Wolf has five total nominations and Scorsese, who is nominated twice as its director and producer, has been nominated 10 times in the past -- seven for directing, twice for co-writing his screenplays (Goodfellas and The Age of Innocence). However, he has only won once, for directing The Departed, his twentieth narrative feature, which also won Best Picture.

The Departed, adapted by William Monahan, is the only Scorsese film to win Oscar gold for its screenplay. In addition to the aforementioned two that Scorsese co-wrote, only five more Scorsese-directed screenplays have ever been nominated: Alice Doesn’t Live Here Anymore, The Color of Money, Hugo, The Aviator, and Gangs of New York.

Wolf’s screenplay has lost at the BAFTA, WGA, and Critics’ Choice awards. Its only wins so far are from the National Board of Review and the Central Ohio Film Critics Association. Unfortunately for Mr. Winter, Ohio is not a swing state in this election. Given the polarization of Wolf, if 12 Years a Slave doesn’t win Best Adapted Screenplay, WGA winner Captain Phillips or BAFTA winner Philomena are more likely to pull an upset in this category.

READ THE FUCKING SCREENPLAY - In general, one page of a screenplay equals one minute of screen time. Winter has estimated his first draft to be about 128 pages; his longest, in the 140s or 150s. The final shooting draft came down to 137, while the final cut of the film runs 42 minutes longer -- a whopping 179 minutes cut down from a rumored four-hour rough cut. Obviously Scorsese filmed more than was on the page.

The combination of the letters f-u-c-k appears in the 137-page draft 181 times, or 1.32 times per page, including dialogue and scene description. The record-setting 569 occurrences in the finished movie means that for every fuck on the page, the number of times the F-bomb is uttered on screen is π. Click here to download the script for free from Paramount Pictures and count the fucking fuckity-fucks for yourself.

This is Part 8 of our ten-part series of profiles on this year's Oscar-nominated screenplays.
Posted by scriptipps at 12:00 PM