How Many Screenwriters Does It Take to Write a Zombie Movie?

This weekend's big release is WORLD WAR Z, based on the bestselling book by Max Brooks, son of comedy legend Mel Brooks (Blazing Saddles, The Producers). The epistolary novel consists of a collection of interviews with survivors of a zombie apocalypse ten years after the outbreak and, therefore, doesn't follow a traditional narrative.

To handle the tricky screenplay adaptation, Paramount first turned to Babyon 5 creator J. Michael Straczynski. The San Diego State University alum's numerous other credits include adapting Ghostbusters into the animated series The Real Ghostbusters and writing for the 1985 Twilight Zone revival, as well as authoring graphic novels (Superman: Earth One, The Amazing Spider-Man, and the upcoming prequel Before Watchmen: Nite Owl/Dr. Manhattan), and penning Clint Eastwood's feature film Changeling. Straczynski also shares a story credit on 2011's Thor and wrote The Complete Book of Scriptwriting.
On WWZ, Straczynski has only a shared screen-story credit -- with Matthew Michael Carnahan, who rewrote the screenplay and retains a co-screenplay credit. Carnahan's other work includes the screenplays for Robert Redford's Lions for Lambs and Peter Berg's The Kingdom, both released in 2007. He is the brother of Joe Carnahan, who wrote and directed Narc, The A-Team, and Smokin' Aces.

After principal photography on WWZ was completed, Damon Lindelof was hired to rewrite the film's third act. About a half hour of footage would need to be re-shot over seven weeks to make the ending more coherent. The co-creator of Lost ultimately was unable to finish fixing the ending, leaving the project favor of trying to fix Ridley Scott's Prometheus and co-write last month's blockbuster Star Trek Into Darkness, currently still in theatres.
Lindelof handed off the rest of the rewrite assignment to Drew Goddard, who had previously worked with him and J.J. Abrams on Alias, Lost, and Cloverfield, and with Joss Whedon on Buffy the Vampire Slayer, Angel, and The Cabin in the Woods. 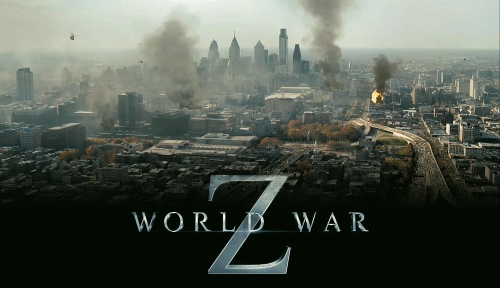 Trivia: The author's dad, funnyman Mel Brooks, also executive-produced a series of acclaimed dramas in the 1980s under his Brooksfilms banner, including The Elephant Man, Frances, and the 1986 remake of The Fly.

Posted by scriptipps at 1:08 PM No comments:

A Brief History of Superman Movies

When Alexander and Ilya Salkind negotiated the film rights for Superman from DC and Warner Bros. in 1975, nobody could see past the campy 1966 Batman starring Adam West.

To prove they meant business, the Salkinds hired Mario Puzo, author of The Godfather, to write their Superman script, and the biggest movie star in the world, Marlon Brando, also from The Godfather, to play their Jor-El.

After Puzo completed a draft for both Superman and Superman II, the producers brought in Robert Benton and David Newman to rewrite the two-picture project. The duo had prior Superman experience, having written the script for the 1966 Broadway musical It's a Bird... It's a Plane... It's Superman, and had just scored an Oscar nomination for their Bonnie and Clyde screenplay.

Benton left the project to adapt and direct Kramer vs. Kramer, taking home Oscars in both categories. Newman then brought in his wife, Leslie Newman, to replace Benton. The Newmans would stick with the Salkinds to pen scripts for Superman III and Santa Claus.

After James Bond director Guy Hamilton had to drop out of trying to make Superman fly due to tax complications, veteran TV director Richard Donner was brought in off the success of his breakthrough film, The Omen.

Feeling the Puzo-Benton-Newman-Newman script was too campy, Donner brought in Tom Mankiewicz to rewrite it with an eye toward verisimilitude. The WGA declined to give Mankiewicz a screenplay credit, so Donner gave him a special credit as "Creative Consultant." Mank would go on to write an uncredited draft of Tim Burton's Batman.

Principal photography on Superman and Superman II began simultaneously in 1977 with newcomer Christopher Reeve in the title role and Oscar winner Gene Hackman as his archenemy, Lex Luthor. Already one of the most expensive and arduous shoots of all time, Donner’s determination to bring a sense of realism to the fantasy film strained relations between the director and producers by busting the budget and schedule.

By the time the producers decided to halt production on Superman II to concentrate on finishing the first movie, Donner was no longer on speaking terms with his bosses, so Beatles director Richard Lester was hired as a go-between. Best known for A Hard Day's Night, Lester had previously helmed a star-studded, two-part Three Musketeers extravaganza for the Salkinds.

Superman: The Movie opened on December 15, 1978, to international success. Grossing $134 million domestically ($455 million in 2013 dollars, placing it in the top 100, adjusted, of all time) and another $166 million worldwide, the film received a special Academy Award for its groundbreaking visual effects.

Before Superman II resumed production, Donner had told Variety he would not return if producer Pierre Spengler were still on the picture. The Salkinds remained loyal to Spengler, who’d been friends with Ilya since childhood, and moved forward with Richard Lester taking over.

Donner had already completed all of Brando’s and Hackman’s scenes for the sequel, plus the diner scenes with the bully, all White House footage, and most of the material set in the Fortress of Solitude, the Daily Planet offices, and on the surface of the moon. Lester shot the Niagara Falls sequence, the destruction of East Houston, the opening sequence in Paris, and most of the climactic super-battle in the streets of Metropolis. He also re-shot enough Donner footage to make himself eligible for screen credit.

After an advance international run, Superman II opened in the United States on June 19, 1981, earning $109 million domestically, making it the third highest grossing film of the year.

Without the encumbrance of Donner’s verisimilitude, Lester, the Salkinds, and the Newmans returned with a campy Superman III in 1983 that starred Richard Pryor and made roughly half what its predecessor made. The Salkinds then switched gears to Supergirl in 1984, which performed even worse, then, the following year, moved on to tell the story of another famous resident of the North Pole in Santa Claus: The Movie.

The Salkinds also produced the live-action, half-our TV series Superboy, which had a successful four-season run, though Papa Salkind was a producer in name only. The father-son team had a falling out while making Christopher Columbus: The Discovery (starring Brando) and Alexander sold the Superman rights out from under his son. Ilya ended up suing his father and they remained estranged until Alexander’s death in 1997.

Meanwhile, Reeve tried to revive his part of the franchise, sans Salkinds, taking creative control and a co-story credit on Superman IV: The Quest for Peace. Co-screenwriter Mark Rosenthal (The Legend of Billie Jean, starring Supergirl's Helen Slater) opened the Superman IV DVD commentary with the honest assessment, “You can tell from the very first credit that something is terribly wrong in Metropolis.” The box office bomb made less than a third of the disappointing take for Superman III and Reeve, himself, asked his father not to go see either of the last two installments.

Superman thrived again on the small screen in Superman: The Animated Series, which ran for four seasons on the WB, Lois & Clark for four seasons on ABC, and most recently Smallville for 10 seasons on the WB. X-Men director Bryan Singer brought Superman back to the big screen in 2006’s Superman Returns, a quasi continuation of the first two Reeve movies with an almost all-new cast; only the deceased Marlon Brando returned in unused Donner footage from 1977. 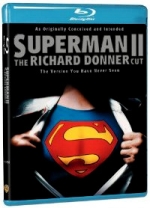 That same year, Warner Bros. responded to fans’ demands for a release of Donner’s original Superman II footage. Superman II: The Richard Donner Cut approximates what the first sequel might have looked like had Donner been allowed to finish it. The re-do restored more Brando footage and incorporated screen test footage of one scene that was never shot.

It was Donner’s vision of verisimilitude that made the first Superman movie a benchmark for all superhero movies to come. Along those lines, Warner Bros. scored a bigger success with Tim Burton’s non-campy Batman, starring Jack Nicholson as the Joker, and Batman Returns. That franchise also began to fizzle with two campier sequels under a different director and the forgettable Catwoman spin-off. But Batman came back to life with Christopher Nolan’s Dark Knight trilogy, the latter two of which took in over $1 billion each worldwide.

Studying the big screen hits and misses from the Man of Steel and the Caped Crusader, the Marvel Universe found its stride first with the X-Men movies, then with a Spider-Man trilogy and reboot. Today they have ongoing feature series for Iron Man, Hulk, Captain America, and Thor, with all four coming together to make Marvel’s The Avengers the third highest-grossing movie of all time.

Learning from those who learned from them, DC and Warner Bros. have re-launched the franchise today with a darker, angstier Man of Steel. Produced by Nolan and directed by Zack Snyder (300, Watchmen), the film stars British actor Henry Cavill in the title role, with Amy Adams as Lois Lane, Michael Shannon as General Zod, Russell Crowe as Jor-El, Kevin Costner and Diane Lane as the Kents, Laurence Fishburne as Perry White, and no Jimmy Olsen.

COMING SOON: ScripTipps will probe the scripts of those first two landmark Superman movies for insightful screenwriting tips that can be used to enhance any screenplay, big or small. 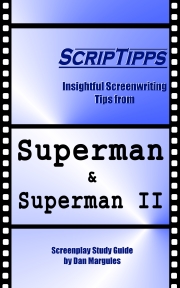 Related article: Super Screenwriting Tips
Posted by scriptipps at 12:45 AM No comments:

The Internship and The Purge

First, former wedding crashers compete for jobs at Google in THE INTERNSHIP. Co-star VINCE VAUGHN has a story and co-screenplay credit. His previous writing credits include The Break-Up (story) and Couples Retreat (written with his Swingers co-star and screenwriter Jon Favreau). Vaughn's Internship writing partner JARED STERN previously wrote Mr. Popper's Penguins and last year's The Watch and also contributed to the animated hits Bolt, The Princess and the Frog, and the Oscar-nominated Wreck-It Ralph.

Also opening today, dystopian thriller THE PURGE, where all crime becomes legal for one night every year.


Writer-director JAMES DeMONACO's credits stretch back to 1996 with Francis Ford Coppola's Jack starring Robin Williams. His other writing credits include The Negotiator, a thriller from 1998 starring Samuel L. Jackson, and the 2005 remake of John Carpenter's Assault on Precinct 13. THE PURGE is DeMonaco's second feature as director, following his 2009 debut Staten Island.

Both DeMonaco films (and Assault) star ETHAN HAWKE, who can also currently be seen, in limited release, in BEFORE MIDNIGHT, the third film in the Before Sunrise trilogy. Hawke shares screenwriting credit with his director, Richard Linklater, and co-star, Julie Delpy, on both the latest installment as well as the 2004 chapter, Before Sunset, which earned him an Academy Award nomination for Best Adapted Screenplay.

Posted by scriptipps at 6:00 AM No comments: