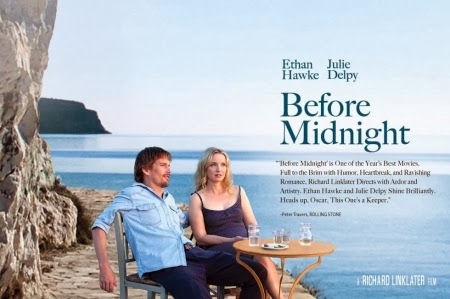 LOGLINE - On their last night of a summer vacation in Greece, a couple gets into an argument that threatens to end their marriage.

WHAT’S IT ADAPTED FROM - Adapted screenplays can be adapted from novels, plays, comic books, TV series, or, in the case of remakes, other movies. Sequels to original movies are considered to be based upon characters created for the original movie, even though the sequel’s story may be completely new and original.

Before Midnight is the third installment in a series of movies that follows the relationship of an American man and French woman who met on a train one magical night in Vienna in 1994. The characters are considered to have been created by the first film’s screenwriters and are the source material “previously produced or published.”

The last screenplay to be nominated for its adaptation of characters created for an earlier movie was another threequel, Toy Story 3, in 2011.

WHO WROTE IT - Richard Linklater is the director and co-writer of all three films in the series. His indie film Slacker inspired a generation of do-it-yourself filmmakers like Kevin Smith, while his follow-up, Dazed and Confused, launched the careers of Matthew McConaughey, Ben Affleck, and others.

In 1989, Linklater met a woman in a Philadelphia toy store. They spent the night walking the through the city, just talking. The incident inspired 1995’s Before Sunrise. Linklater asked actress Kim Krizan, who had appeared in his previous two films, to write the screenplay with him to bring a female perspective to the character of Céline.

More recently, Krizan has branched out into writing comic books and graphic novels and currently teaches creative writing at UCLA Extension.
For the sequels, Linklater turned to the actors who had inhabited the roles in Before Sunrise, Ethan Hawke and Julie Delpy, to bring more of themselves into the reexaminations of their alter egos. Together, the trio penned the scripts for Before Sunset and Before Midnight, based on Linklater’s and Krizan’s characters.

Hawke made his screen debut at the age of 15 in Joe Dante’s Explorers. He had starring roles in Ben Stiller’s Gen-X drama Reality Bites, opposite Denzel Washington in Training Day, and in the sci-fi thriller Gattica, where he met his first wife, co-star Uma Thurman. His divorce from Thurman is said to have informed his contributions to his character, Jesse, in Before Sunset.

Hawke divides his time between stage and screen. He has acted on Broadway and directed two Off-Broadway plays. He has also written two novels, including The Hottest State, which he later turned into a movie, directing and writing the screenplay adaptation himself.

Born in Paris, Julie Delpy was discovered at the age of 14 by director Jean-Luc Godard and became internationally famous after starring in 1990’s Europa Europa as a Nazi who falls in love with a Jew. In addition to her work in the Before... series, she has appeared in the acclaimed Three Colors trilogy by Krzysztof Kieslowski and has written and directed a number of her own movies, including 2 Days in Paris and its companion, 2 Days in New York. She became a U.S. citizen in 2001.
Linklater’s other films include School of Rock and Bernie, both starring Jack Black, Fast Food Nation, and the 2005 remake of The Bad News Bears. Last month he premiered Boyhood at the Sundance Film Festival to rave reviews (currently 100% fresh at Rotten Tomatoes). The experimental film, which features Before... star Hawke, was filmed over a few days a year, every year for twelve years.

PART THREE - We first met Jesse and Céline when they first met each other on the train in Before Sunrise. They spent the night getting to know each other, never expecting to meet again. By the end of the movie, they’d become so close, they agreed to return to Vienna in six months, and we’re meant to be left eternally wondering if they ever did keep that date.

A little piece of what made Sunrise special was erased nine years later when we were given a definitive answer. Jesse showed up, Céline did not. Now he’s written a book about that fabled Austrian night, and she shows up at his Paris book signing. They have until Before Sunset to catch up and maybe reignite their lost romance. 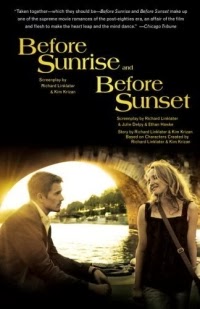 Another nine years later, they are married and have two children. On the last night of their summer vacation in Greece, they reach an impasse about their future. He wants them to move to the States so he can spend more time with his teenage son from a marriage that occurred between the first two movies, while she wants to take a job in Paris.

The dilemma opens a Pandora’s box of exploration into their relationship, ultimately begging the question: Do they still love each other? They have until Before Midnight to decide. More importantly, we wonder, where will they be nine years from now, and what will Part 4 be called -- Before Breakfast?

WILL IT WIN - Before Midnight is the only nominee in its category not adapted from a book. In fact, the other four nominees are all true stories, adapted from memoirs or non-fiction books. Two of the Best Original Screenplay nominees are also true stories, written from general research rather than a single book. So for the Academy, truth seems to be more noteworthy than fiction this year. 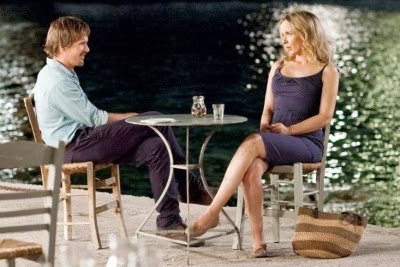 Linklater, Hawke, and Delpy penned the screenplays for both Before Sunset and Before Midnight. Both scripts were nominated for Oscars and WGA awards in the Best Adapted Screenplay category and the Independent Spirit Award for Best Screenplay. In 2005, they lost all three awards to Sideways.

Before Midnight is the second nomination for Linklater and Delpy, while Hawke is on his third go-round, having been nominated as Best Supporting Actor for his performance in Training Day.

This year, Captain Phillips took home the WGA award for Best Adapted Screenplay in a contest that didn’t include 12 Years a Slave or Philomena due to the WGA’s stricter eligibility requirements. If Slave wins the top prize, it’s likely to nab a statuette for its screenplay too, as it did at the Critics' Choice Awards this year in both categories.

Those who see the Before... movies walk away from each chapter desperate to know what will become of their beloved Jesse and Céline down the road. For the two later installments of the small, intimate, indie franchise to both be recognized with nominations for their writing shows the series has obviously resonated with Oscar voters, so there is an outside chance of an upset come March 2.

Before Midnight is also nominated for two ScripTipps Platinum Brad Screenplay Awards in the categories of Best Franchise Screenplay and Best Screenplay Written or Co-Written by the Film’s Lead Actors. You can vote in these and thirteen other screenplay categories by clicking here.

READ THE SCREENPLAYS - Download a PDF of the Oscar-nominated, 114-page screenplay for the 109-minute film, Before Midnight, for free from the Sony Pictures Classics website (click here).

The first two screenplays, Before Sunrise and Before Sunset, are available at Amazon.com.

INTERVIEWS WITH THE WRITERS

The Q&A with Jeff Goldsmith: Richard Linklater, audio podcast, May 24, 2013

This is Part 4 of our 10-part series of profiles on this year's Oscar-nominated screenplays.
Posted by scriptipps at 4:00 PM