EVERY SCREENPLAY IS PERFECT... until somebody reads it! 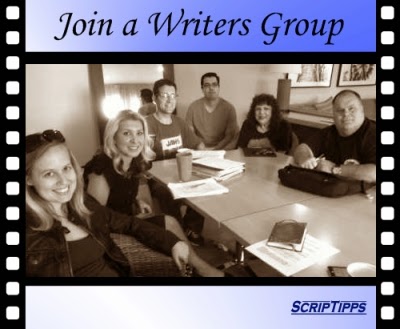 The best way to improve your screenwriting, after reading your favorite ScripTipps book, is to put your script in front of your peers and see what they have to say about it.

Here is our exclusive listing of writing groups for screenwriters that you might want to join:

CULVER CITY AREA WRITERS GROUP
NEW GROUP FORMING! Meets on Tuesday evenings, twice monthly, at a private residence (not wheelchair accessible) in Mar Vista/Culver City area near the I-405. One member's full feature or TV script or multiple members' partial scripts in any genre, usually read in advance, are discussed at each session. Submit a writing sample for approval to join this new group of 8-10 members. Cost: Donation to cover refreshments.

DRAMATICA WRITERS GROUP
Meets on the first and third Tuesday of each month, from 7:00pm to 9:00pm (often longer), in the Burbank offices of Write Brothers, Inc. (not wheelchair accessible). One writer's project, read in advance, is analyzed using Dramatica process during each session. Material discussed can be completed or partial drafts of feature or TV scripts, treatments, pitches, short stories, plays, webisodes, or anything with a story at any stage in your creative process where you are ready for feedback. Active since 1995, this group's meetings usually have 8-12 people in attendance and are open to anyone with an interest in the Dramatica Theory of Story (ownership of the software is not required). Cost: Free.

GOOGLE SCREENWRITERS & TV WRITERS HANGOUT
Meets Sunday evenings, 7:00pm, via Google Hangouts video chat (webcam and mic required to participate). One member's full feature script or up to 100 pages of partial script submissions from multiple members, submitted by Friday, are read in advance and discussed in the live chat. Advanced writers with training and/or industry experience are welcome to submit 15-page samples for approval to join. This group has been active for six months, has 4-5 members, and covers features, shorts, pilots, plays, and any other scripted material in any genre. Cost: Free.

INK TANK SCREENWRITERS MEETUP GROUP
Meets on Sundays, 5:00pm, once or twice a month at floating residential or public locations in Burbank, North Hollywood, and Los Angeles. One member's full feature script, read in advance, is discussed at each session after announcements of upcoming screenwriting and film events. Open to feature screenwriters in all genres. This group has been active since 2006 and usually has 5-12 people in attendance. Cost: Free.

Contact: Carlos Aldana at carlos@carlosaldana.com or find them on MEETUP.

JASON'S GROUP
Meets one Sunday a month, 4:00pm, at floating locations in Studio City, Burbank, and Glendale. One member's full feature or TV script, read in advance, is discussed at each session. All levels of experience welcome. This group has been running for over eight years and has 10-12 active members. Cost: Free.

ORANGE SCREENWRITING GROUP
Meets the third Sunday of every month in Orange at the Panera Bread outside the Orange Mall on Tustin Avenue. One member's full feature script in any genre, read in advance, is discussed at each session. Also open to reviewing outlines or partial scripts as needed. Beginners welcome if you have completed at least one script. This group has been active for 15 years, currently has 6 members, and can handle up to four more. Cost: Food or beverage purchase from venue.

Contact: Judith Watson at cinemaself1@aol.com with a bio that gives the group an idea of whom they are considering.

PASADENA WRITERS GROUP
This legacy-named group meets in Hollywood on Sunday afternoons, every other week, in a classroom. One member's feature or original TV pilot script in any genre, read in advance, is discussed at each session; members also provide written notes. Active for 10 years, this group currently has about 15 members and recruits and votes on new members periodically. Cost: Room rental, if applicable.

THE RECOMMENDED SCREENWRITERS GROUP
Meets once a month on Wednesday evenings at the Howard Fine Acting Studio (not wheelchair accessible) in Hollywood. Each session features a table read with actors, followed by constructive feedback from writers and actors led by UCLA Extension screenwriting instructor Bill Boyle. Material usually consists of one member's full feature or TV pilot script or up to 30 pages of two scripts. Also open to shorts, webisodes, and stage plays in any genre. This group currently has 9 members in its fourth season and is looking to expand to no more than 15 advanced writers, by invitation only, after attendance at one session (at no charge) for evalation purposes. Cost: Monthly membership dues (usually $20) to pay for the theater space.

* "Recommended" is the name of this group and does not imply it is recommended over other groups.

SANTA MONICA SCREENWRITERS
Meets Sunday mornings, twice a month in Santa Monica at a private conference room or local coffee shop. One member's full-length feature or television pilot script in any genre, read in advance, is discussed at each session. This group has been active for over nine years and currently has approximately 10 members. Open to advanced screenwriters only, pending approval based on writing sample submission. Cost: Free, plus food/beverage purchase when meeting in coffee shop.

STORYBOARD SCREENPLAY DEVELOPMENT GROUP
Meets the second Monday of the month at 20th Century Fox studios in Century City. Each session is led by a guest moderator. One produced screenplay for a film in current release is read in advance and discussed at the meeting. (Members may also present original material for feedback in separate sessions.) Active since 1981. Registration is required, no later than one week prior to event, in order to gain access to the lot. Cost: $35, or $30/month with a six-month membership; includes a hard copy of the script, postage, and sandwiches, snacks, and beverages.

DISCLAIMER: The writers groups listed here are provided as a service to the screenwriting community. They are independently owned and operated and are not affiliated with, nor endorsed by, ScripTipps. ScripTipps accepts no responsibility for the veracity of any of the above information or for the activities of the writers groups or the actions of the groups' individual members or moderators. This list is maintained exclusively for ScripTipps by Dan Margules, former Director of Writers Groups for Scriptwriters Network.  Please submit errors, omissions, change requests, or requests to have your group added to writersgroups@ScripTipps.com. ScripTipps reserves the right to refuse to list a writers group, or remove a listing, for any reason.