In the old days it was easy. You weren’t allowed to show two people in the same bed. The only acceptable way to write a sex scene was “FADE OUT.”

Those days are gone. If you’re writing a screenplay today involving romance, you’re characters might want to hook up. Do you show “it”? What do you put on the page? Do you write out who touches what when? Do you describe how the actors should scrunch up their faces when they “finish”?

Answer: It depends on the needs of the story. In Basic Instinct, for example, a detective sleeps with a murder suspect in a case where the killer strikes during sex. You can’t skip the bedroom. The script must spell out how the suspense of the scene derives from Catherine reaching back as if she’s going for a hidden ice pick.

Let’s take a look at how the sex was handled in the R-rated comedy Bridesmaids. The movie opens on ANNIE (Kristen Wiig) and TED (Jon Hamm) in a mattress-bouncing session already in progress.

We see them in a series of comical positions separated by jump cuts.

ANNIE WALKER, mid 30's, is having sweaty sex with TED, handsome, 40. In a series of close-ups and jump cuts, we see Annie in the middle of a very long, vigorous session.

Most of the shots in the montage were improvised. The point of the gag is to establish that these two characters are “maybe on different rhythms here,” as Annie notes in the middle of it all. The sex is either too fast for her or too slow for him.

The other goal of the scene was to provide a contrast to the sex scenes with OFFICER RHODES (Chris O’Dowd), Annie’s real love interest.

On their first date, Rhodes takes Annie to his beat on the side of the road where he lets her “handle his equipment.” There is a subconscious connection as she aims his radar gun at traffic to help him catch early morning speeders.

Each car that passes goes faster than the one before. 58 mph. Then 63 mph. The next one slows the action down to a smooth 48 mph, which Rhodes guesses correctly.

“That’s never happened,” he says. Unlike Annie and Ted, who were on “different rhythms,” Annie and Rhodes are perfectly in sync. It’s never happened for her before, either. When the final car shoots by at 93 mph, we see Annie look happy for the first time in the movie, 53 minutes since it began.

Later, the couple decides to physically consummate their relationship. “Annie and Rhodes fly through the door, making out.” They fall onto the bed. Between their heavy breathing, they both manage to say they like mountain biking and are “glad this is happening.”

We’ve already seen their metaphoric roadside intimacy, and we’ve now re-established how much more these two lovers are on the same page than Annie and Ted. Sticking around any longer would be voyeuristic. Despite the raunchy film’s R rating, we cut abruptly to the next morning without seeing a single item of clothing come off. 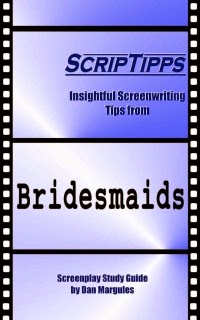 Bridesmaids, by first-time screenwriters Kristen Wiig and Annie Mumolo, was nominated for two Academy Awards in 2012, including Best Original Screenplay, a rarity for a raunchy comedy. For more insightful screenwriting tips from this well-crafted script, read the ScripTipps deconstruction of Bridesmaids, on sale now.
Posted by scriptipps at 8:00 AM