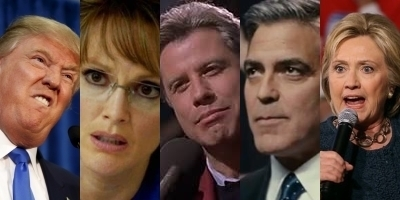 For an election cycle that’s been playing like a reality TV show, one might be wondering if there’s a movie in this unprecedentedly nasty fight for the White House. What would be the best way to tell that story? Will Danny Strong be the one to tell it? What message would a movie inspired by 2016 want us to take away from a reenactment of all the crazy Trumpiness? To help figure it out, let’s examine five recent portrayals of our national octennial nightmares, including two behind-the-scenes peeks of campaigns dealing with sex scandals (one cynical, one optimistic), one analysis of what really matters to the everyman voter, one examination of how our votes are counted, and one indictment of how a vice presidential candidate can totally derail a campaign. 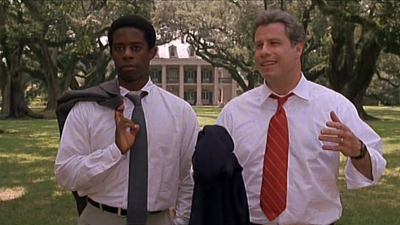 PRIMARY COLORS (1998), a fictionalized account of Bill Clinton’s 1992 primary campaign, was based on a novel first published anonymously, later revealed to have been authored by journalist Joe Klein, who had covered the campaign for Newsweek. Comedian Elaine May wrote the screenplay, earning her her second Academy Award nomination in the Best Adapted Screenplay category (following her work on Heaven Can Wait twenty years earlier). The film was directed by May’s former comedy partner, Mike Nichols (The Graduate, Working Girl).

Like The Great Gatsby and The Shawshank Redemption, Primary Colors splits the protagonist and main character into two separate roles. Here the protagonist is the Clintonian southern governor Jack Stanton (John Travolta), but his story is told through the eyes of his reluctant Stephanopoulos-like campaign manager Henry Burton (Adrian Lester), the film’s idealistic main character. Jack’s primary concern is to win the election, which is the story’s external goal. Henry, on the other hand, is the one who goes on a journey related to the film’s thematic goal: to find out whether idealism is worth preserving at the cost of moral sacrifice. While Henry has an active role in the campaign, he is a passive narrator in regards to the plot, leaving Jack to be an impact character who changes those around him, including Henry and the audience. Going on the journey with Henry instead of the womanizing candidate allows us to better understand why we might root for this unsympathetic protagonist. 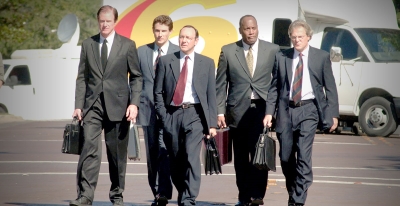 RECOUNT (2008) retells the inside story of the stranger-than-fiction events of 2000 that kept America in suspense for 36 days after Election Day. Empire co-creator and former actor Danny Strong (Buffy The Vampire Slayer, Gilmore Girls) researched his first produced screenplay, with guidance from the Sydney Pollack, primarily through four out of over twenty books on the Florida recount efforts as well as through in-person interviews with at least one person who had been in the room for almost every scene he chose to depict. Strong’s teleplay for the HBO movie, directed by Jay Roach, won a WGA award and was nominated for an Emmy.

The candidates, Texas governor George W. Bush and Vice President Al Gore, are shown only from behind, and in only a few scenes, since the story really belongs to the Gore campaign’s General Counsel Ron Klain (Kevin Spacey), who led the fight on the ground in Florida. The script bounces back and forth between the hero’s strategy sessions and those of his adversary, Bush Sr.’s former Secretary of State James Baker (Tom Wilkinson), giving both sides equal weight; Klain comes off as the protagonist because his prior ousting from Gore’s good graces gives him a personal arc and the other team’s lead in the initial counts paint Klain as the underdog. Events unfold in the manner of a thriller, with a roller-coaster of triumphs followed by setbacks, again and again. This gives us the sense of two warring sides even though the opponents never meet face-to-face until they shake hands and walk away in the film’s dénouement. Also worthy of study is the way Strong condenses and distills 36 days worth of convoluted legal maneuvering, esoteric technical details, and the philosophical nuance of legality versus fairness, into a two hour movie that dramatizes the whole mess while at the same time making it entertaining and easily digestible. 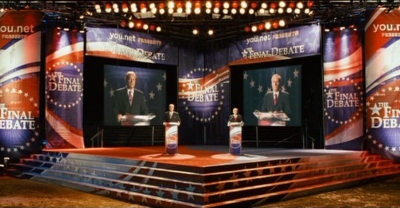 SWING VOTE (2008), also recalling the squeaker of 2000, takes the high concept approach, asking what would happen if the presidential election were so close that it all came down to one person. Joshua Michael Stern, creator of Graves, a new political comedy on Epix, directed the film and co-wrote it with his friend Jason Richman (Lucky 7). As with any high concept movie, the premise is no more plausible than a mother and daughter magically switching bodies. Just go with the magic “fortune cookie” of a voting machine breaking down, thereby giving our everyman hero ten days to re-cast the deciding vote, and enjoy the sharp political satire enmeshed in the sentimental father-daughter story.

Bud Johnson (Kevin Costner) is the clear protagonist in that he goes on a journey that transforms him from apathetic citizen to someone who learns to take his civic responsibilities seriously. However, the main story goal, to get him to vote (and to get him to vote for a specific candidate), belongs to three other characters: his daughter Molly (Madeline Carroll), who drives the story, and the two candidates -- the conservative incumbent (Kelsey Grammer) and the liberal outsider (Dennis Hopper). The candidates, along with their respective campaign managers, traverse a parallel arc, each tailoring his campaign to one single voter by comically flip-flopping, each eventually rediscovering his own moral center. The script deftly weaves Bud’s A-story and the candidates’ B-stories with two C-stories involving a local reporter hoping to graduate to the national stage while striving to maintain her integrity (echoing the theme of the candidates’ arcs), and a surprisingly dark revelation about Molly’s absent mother that makes the young girl finally appreciate her father, dysfunctional though their relationship may be. Added to all that is the barest hint of a pair of love interests for the two lead characters, yet the movie never feels overstuffed, nor the narrative structure muddled. Every character earns the redemption they find in the Capra-esque ending that argues for sane, issues-based political deliberation over this year’s focus on deleted emails, election rigging, and small-handed pussy-grabbing.

THE IDES OF MARCH (2011) is loosely based on the 2008 play Farragut North by House of Cards creator Beau Willimon, which was drawn from his experiences working on Howard Dean’s 2004 presidential campaign. Director George Clooney and his producing partner Grant Heslov optioned the property before the play was produced and wrote their version without ever seeing the play. They added thriller elements to the plot and drew additional inspiration from Clooney’s father’s failed 2004 congressional campaign as well as the documentary The War Room, about Bill Clinton’s 1992 campaign. Their script was nominated for an Academy Award for Best Adapted Screenplay.

Like Primary Colors, The Ides of March follows a whiz-kid campaign manager, Stephen Meyers (Ryan Gosling), on a quest to get a Democratic governor, Mike Morris (Clooney), his party’s nomination for president. Also as in the earlier film, there is a sex scandal and a death in the third act, and both movies deal thematically with the necessity for politics to corrupt the soul. However, March is a much darker story and does not split the protagonist and main character; it’s not the story of how Morris gets the nomination (he doesn’t even appear on stage in the original play). Instead, we follow Stephen on his active path to destruction and the film is entirely about testing how far he will go to win. 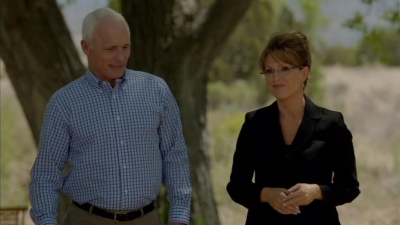 GAME CHANGE (2012), another HBO film, reunites the Recount writer-director team of Danny Strong and Jay Roach. While the source book by journalistsJohn Heilemann and Mark Halperin, compiled primarily from unsourced “deep background” reporting, encompassed the 2008 campaign cycle in its entirety, the election of the nation’s first African-American president is barely a footnote -- Obama is only seen in archival footage -- in the adaptation that focuses entirely on the game-changing selection of Alaska governor Sarah Palin (Julianne Moore) as the Republican nominee for Vice President. Strong and Roach each won an Emmy for their work on the movie, which also took home three Golden Globe awards and three other Emmys.

The film opens and closes with a framing device: Political strategist Steve Schmidt (Woody Harrelson) looks back on his role in the 2008 Republican campaign and wonders whether he would push for putting Palin on the GOP ticket if he had to do it all over again. Like the other movies on this list, our guide is not one of the candidates, but a powerful behind-the-scenes character. Schmidt’s arc charts his intermittent successes in taming the shrew along with his growing frustrations as he loses control of the monster he’s created. The first act also sets up the real candidate, “maverick” senator John McCain (Ed Harris), as the underdog (he’s way behind in the polls) who, again like the idealists in the movies mentioned above, doesn’t want to play dirty or compromise his principles. By the third act, he will give in to temptation and follow a dark path, only to have to be reminded of what he really stands for. But the central character is Palin herself, a naïf thrust into the story so gung ho to win the White House that she ultimately forgets her fight is supposed to be for someone else’s benefit. One of the unique challenges of the script is to recreate a character and events that were heavily parodied in pop culture only a few years before. Palin’s greatest quips and gaffes pop up as touchstones more to remind us where they fell in the timeline than for just having fun reenacting them; the main storyline is first and foremost concerned with telling the backstage goings-on to help us better decipher the meaning of what we were collectively experiencing at the time. The drama is also not without a few eerie predictions on where the “reality show” nature of Palin’s popularity would lead us in 2016. 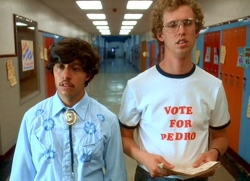 Posted by scriptipps at 2:00 AM