The Complicated History of a Movie About American History

In 1964, My Fair Lady producer Jack Warner took a lot of heat for replacing the play's unknown star, Julie Andrews, with Audrey Hepburn.

Thinking he'd learned his lesson, Warner made sure his 1972 film version of 1776 would retain the same director and cast that originated the play on Broadway. But that didn't stop him from tinkering with the picture, cutting forty minutes from it without the director's knowledge -- after it was considered locked. Not wanting to be second-guessed, he ordered the editor to destroy the deleted footage -- and the negatives.

The most controversial cut was "Cool, Cool, Considerate Men," a song that mocks conservatives, rumored to have been excised at the request of then-President Nixon. It was said that Warner cited this lift as one of his biggest regrets in life just prior to his death.

The producer's politically motivated hatchet job left the film a largely forgotten curiosity for years. It opened big but, but quickly lost steam as the era of big movie musicals was already on the decline. 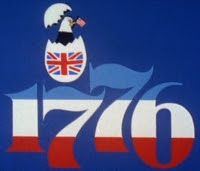 First time film director Peter H. Hunt shot 1776 in Panavision. "I played the entire frame," he said in a 1992 interview. "I don't even think there was a ground glass that indicated the TV screen in the viewfinder. Whether there was or not, it doesn't matter because I didn't pay any attention to it." As a result, the early TV and VHS transfers of the already butchered theatrical cut were unwatchably panned and scanned.

Further diluting the film's production values, Warner had released it in mono to save money, even though the soundtrack LP had been released in stereo. In 1991, Pioneer planned to release the first-ever letterboxed transfer of the movie on laserdisc. Telecine operator Marc Wielage, who didn't particularly like the film when he color corrected it, announced the pending release in the Consumer Electronics Forum on CompuServe. Fans there generated more buzz than expected and wanted to know if it would also be in stereo.

These requests led to Pioneer searching the Columbia Records vaults for the original stereo stems. Only when vocal bleed-through of a missing verse in one of the songs was heard on the orchestra tracks did the restoration team realize there was more to the film version of 1776 than they thought. Tracking down original editor Florence Williamson, the restorers learned that she had secretly kept the shredded film in a safe place for twenty years, just in case.

Delaying the laserdisc release by a year, Pioneer was able to piece it all back together, frame by frame, except for one five second scene that was never found and another scene for which they could only find a black and white work print. They released the Pioneer Special Edition without color correcting any of the scratchy, restored footage. The jarring color shifts signal the scenes Jack Warner had problems with. Strangely, almost all the dialogue from the Delaware delegation was among the seemingly arbitrary omissions. Perhaps he thought it would be cheaper somehow if there were only twelve colonies?

The two lost pieces were eventually found and restored for the 2002 DVD release. That edition, seamlessly color corrected, represents the official Director's Cut, as it re-removed a few restorations the laserdisc people didn't know were Hunt's intended cuts. Ironically, those final cuts include the missing verse that started the search for the rest of the missing footage. 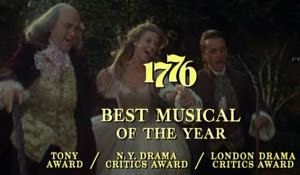 The DVD cut is also the version now shown on Turner Classic Movies every year on the Fourth of July. Its existence is one of the earliest examples of movie fans using the democratic power of the internet, a few years before the World Wide Web, to influence the release of an alternate version of a cherished but mishandled film.

This 4th of July, watch 1776 on Turner Classic Movies or on Amazon streaming!

(Portions of this article first appeared on Five Sprockets on July 5, 2010.)
Posted by scriptipps at 6:00 AM