Logline: A young writer rents an isolated cabin in the woods where she is gang raped and left for dead. She survives the attack and systematically lures each of her assailants to a gruesome death. 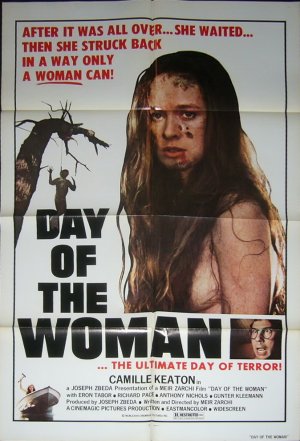 Starring a grand-niece of silent film legend Buster Keaton, the self-distributed indie, Day of the Woman, opened in 1978 to almost no notice whatsoever.

So the filmmaker retitled his opus and tried again. I Hate Your Guts also failed to attract any attention.

A third rename found a similar non-response for The Rape and Revenge of Jennifer Hill.

Finally, in 1980, the Jerry Gross Organization picked up the film for distribution and gave it its fourth and most memorable title. 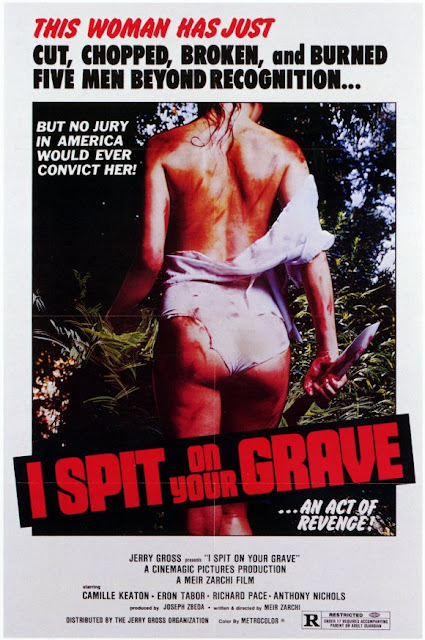 I Spit on Your Grave was reviled by critics like Roger Ebert, who called it sick, reprehensible, contemptible, and "a vile bag of garbage." Thanks to the new title and the extra free publicity from Siskel & Ebert vehemently condemning it on two special episodes of their PBS show, the film finally became a bona fide cult hit. In addition to the updated production values evident in the 2010 version of I Spit on Your Grave, screenwriter Stuart Morse made a number of improvements on the script.

SPOILER ALERT: Plot twists new to the 2010 remake are discussed below. If you have not seen this version yet and plan to, stop reading now.

The most significant change was the addition of a new character: the sheriff.


"One of the things we had to solve and update from the original is, 'Why didn't she go to the authorities?'" producer Lisa Hansen says on the DVD commentary. "In the original film, they just left her for dead in a cabin with DNA and everything else. You couldn't do that today."

Bringing in the law helped in more ways than just appeasing Law & Order know-it-alls. First, the script gives Jennifer an opportunity to escape from her worst nightmare, to a false hope that the worst is over, right back to her nightmare just beginning. These consecutive reversals are what give a screenplay a "roller-coaster" feeling.

Adding the sheriff to the bad guys' team opened up a whole new world of character development. He had more to protect, and more ways to protect himself and his buddies. Morse even gave him a wife and child, giving Jennifer something extra to play with in her revenge quest. There's a more pronounced hierarchy of villains than there was in the original film.

And forget about DNA. Morse gave the revised perps a video camera. Now they make their own evidence that can be used as a new plot complication. The camera doesn't even feel contrived, like the gimmick it was in Henry: Portrait of a Serial Killer, because people filming themselves doing bad things has actually become commonplace today.

ScripTipps Tip: Use reversals to make a screenplay feel like a roller coaster.
ScripTipps Tip: Don't eliminate all hope or the audience will pull back, unable to keep rooting for the hero.
ScripTipps Tip: Add obstacles and complications for heroes and villains. Don't make anything easy.

These are just some of the screenwriting tips that can be learned from analyzing different drafts of a screenplay or the differences between a remake and its parent film -- even the most depraved film. Joining Wrath of the Titans, The Fly II, 102 Dalmatians, Father of the Bride Part II, and Ocean's 12 & 13 on the list of sequels of remakes, I Spit on Your Grave 2 opens today in one theatre in Los Angeles (for Oscar qualification?), then hits DVD, Blu-Ray, and Amazon Instant Video next Tuesday.
Posted by scriptipps at 12:30 AM