In the first act of a screenplay, the hero is often stuck.

We meet him in his “normal” world, where he has a problem. If he doesn’t move forward on his journey, which comprises the second act, nothing will change. His problem will never be resolved. He won’t grow or learn anything. He will never be any better off than he is at the beginning of the screenplay.

This condition is sometimes referred to as “stasis=death.”

In The Spectacular Now, protagonist SUTTER KEELY thinks he has it all. He always knows the exact thing to say to make people feel good about themselves, which makes him the most popular senior in high school. He can bullshit his way around teachers who expect him to study. He’s got a fast car and an easy part-time job with a boss who lets him drink at work because he’s just that likable.

And of course, he’s dating the hottest girl in school. When they break up, his boss says to him, “I thought she’d be the one to pull you out of neutral.”

“What are you talking about?” Sutter scoffs, cluelessly. “I’m in overdrive!”

This dialogue exchange is an excellent statement of theme. Sutter’s fast-lane lifestyle makes him feel like he’s moving forward—in overdrive—while in reality, he’s only going nowhere fast. It will take the plain girl he’s never noticed in class to steer him onto the road to becoming a whole, healed person. 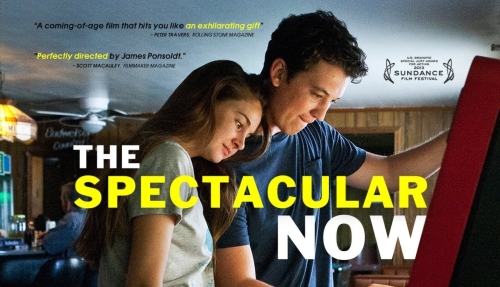 The Spectacular Now, now playing in limited release, is based on a young adult novel by Tim Tharp. The screenplay was adapted by Scott Neustadter & Michael H. Weber, the Spirit Award winning duo behind (500) Days of Summer. The scribes’ next outing is The Fault In Our Stars, another YA adaptation also starring Spectacular’s Shailene Woodley (The Descendants, Divergent). The Spectacular Now currently holds a 93% fresh rating on Rotten Tomatoes.
Posted by scriptipps at 9:00 AM