The Fault in Our Stars: Adaptation Analsysis

The Fault in Our Stars is a love story about a teenage girl with stage IV thyroid and lung cancer and a boy who has lost a leg to bone cancer, now in remission. Based on a novel that has sold over ten million copies, the screenplay was adapted by Scott Neustadter & Michael H. Weber, who also penned (500) Days of Summer and another YA adaptation, The Spectacular Now. 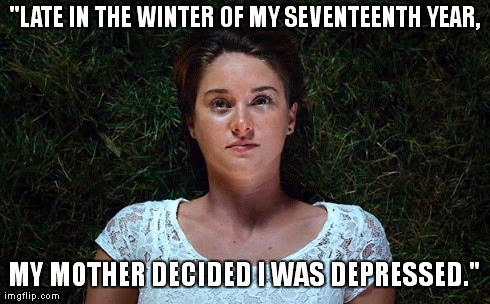 The book is written in first-person, narrated by Hazel Grace Lancaster, the protagonist. The main action begins when she reluctantly goes to a lame teens-with-cancer support group where she meets her love interest, Augustus Waters.

Hazel’s decision to hang out with Gus after the meeting sends her into the upside-down world of Dating a Hot One-Legged Boy with Cancer. In the 114-page screenplay, this occurs on page 16, while the novel reaches the same plot point at the end of its first chapter.

Before we can appreciate what’s different in the protagonist’s life after the introduction of this new element, we need some sense of her “normal” world. Presumably, the narrator is starting her story with the day she met Gus, but in prose, it’s easy for her to preface that story with a brief explanation of what brought her to the group, followed by a general description – not a full-blown flashback – of the group (pre-Gus), including an introduction of her friend Isaac, who will bring Gus to the next session, thereby forever changing her world.

The three pages of prose setting up Hazel’s world would be far too much exposition to be handled in voiceover. Instead, the screenwriters invented a visual way into her world. They start by showing us what Hazel and Gus are not:

Hazel and the BOY we will come to know as AUGUSTUS "GUS" WATERS (17) at an outdoor restaurant in some magical place. They look very much like the perfect Hollywood couple.

"Perfect" Hazel and "Perfect" Gus sit on a BENCH overlooking an incredible seascape in some foreign country.

"Perfect" Hazel and "Perfect" Gus kiss in a dark room [and] fall onto a bed together. They look deep into one another's eyes.

Over this series of shots, we hear voiceover that is not taken from anywhere in the book. Hazel tells us how movies often sugarcoat sad stories, but she will not. Then, at the top of page 2, we see the real Hazel, with “some key and obvious differences,” such as an “OXYGEN TUBE in her nostrils which helps her to breathe.” 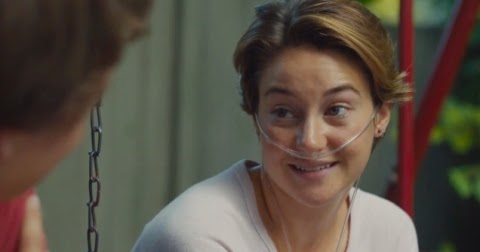 The next three pages of the script play out a scene that was merely mentioned in the second paragraph of the book, where her doctor recommends the support group because Hazel seems depressed. This expanded scene combines some of the book’s narration in voiceover with original dialogue and even a small montage showing examples – consistent with, but not duplicated from, the novel – of her “normal” pre-Gus life.

Next we have a two-page scene of the typical, pre-Gus support group session, an abbreviated version of what’s described in more detail in the second and third pages of the book, as a basis to compare to the life-altering session that gets the story going. This is followed by a modified version of the first actual scene in the book, Hazel's mother pushing her to go to group on the Day Her Life Will Change. Some of mom’s dialogue was given to her father, who was somewhat under-written in the novel but probably should have something to do on-screen since we will be seeing him there anyway.

Adapting a novel into a screenplay is more complex than importing a manuscript into Final Draft and removing the “he saids” and “she saids.” Neustadter & Weber converted very readable, literary exposition into cinematic exposition, setting up the same world the author created, while maintaining the spirit of his tone, by expanding on the source material and even inventing some new content. To be sure, other chapters are condensed and some minor characters dropped. Otherwise, the script would be three hundred pages, resulting in a five hour movie. 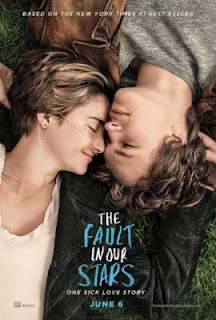 Studying how the pros adapt a best-selling novel to fit within the limitations of a screenplay is very useful. Every time you rewrite your original script, you are adapting the previous draft. Moving scenes around and eliminating unnecessary subplots and characters requires attention to the ramifications such revisions can have on all remaining scenes. To learn more, see ScripTipps: The Descendants for an in-depth analysis of an Oscar-winning adaptation.

The comparisons above are based on the first draft of the screenplay, dated May 1, 2012. The pages described may differ from the final cut of the film, which opens tonight. THE FAULT IN OUR STARS was directed by Josh Boone. Click here to read about his first movie, STUCK IN LOVE.

UPDATE (9/16/14): The ScripTipps scene-by-scene deconstruction of the full screenplay for The Fault in Our Stars is now available.
Posted by scriptipps at 5:00 PM