When ARRESTED DEVELOPMENT debuted to critical acclaim in 2003, its single-camera “mockumentary” style was relatively new to American sitcoms. The format would later become popularized by The Office, Parks and Recreation, and Modern Family. As groundbreaking as it may have seemed, Arrested Development still stuck to the tried-and-true traditional sitcom structure of a cold open, two acts, and a tag for its original three-season run on FOX. 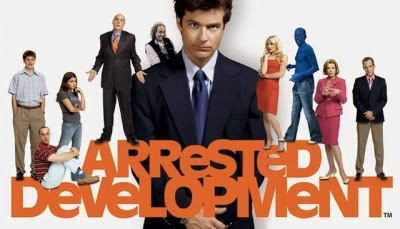 In the vein of Seinfeld, the series deftly wove multiple subplots toward a single scene or sequence that would tie them together by the end of each episode. Although an ensemble show, Arrested Development also had a clear protagonist in Michael Bluth (Jason Bateman). From the very beginning, when Michael vows to leave the family but is forced to keep them together after their patriarch is jailed, we experience the entire series through his perspective.

When the show’s small but loyal fan base demanded a fourth season, 8 years after the series was canceled, they got an entirely different animal. First, appearing on the commercial-free Netflix streaming service meant no more act breaks. The cast’s incompatible schedules meant few episodes would include the entire ensemble. Instead, each episode focused on one character, lacking the interweaving subplots that had characterized the series in its original run and eliminating the focus on Michael as the protagonist.

Finally, last year’s fourth season differed in its season-long structure. As the title implied, Arrested Development was a series that resisted change, stretching the characters’ conflicts for years without any real development. To prevent a feeling of repetition or stagnation, the original series had set up minor season-long arcs, allowing the continuing conflict to play out in perpetually varying but ultimately cyclical permutations.

For example, George Bluth spent all three FOX seasons fighting the SEC’s charges against him. In the first season, he was behind bars. In the second, he escaped from prison and hid out in the family’s attic. In the third, he was recaptured, but allowed to stay with his wife under house arrest. Throughout the series, he was a prisoner. In the 2013 Netflix revival, however, George’s arc revolves around his purchase of worthless land and subsequent long-con attempt to sell it at an inflated price.

Response from fans and critics to the fourth season was not as unanimously favorable as the original series, though there is still talk of a possible fifth round on Netflix or a feature film. 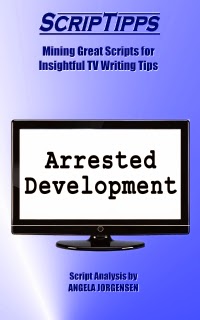 Angela Jorgensen’s in-depth, scene-by-scene, ScripTipps analysis of Mitchell Hurwitz's Emmy-winning pilot script for Arrested Development is now available at Amazon.com. Arrested Development was created by Hurwitz and produced by Ron Howard. The pilot episode and the rest of the first three seasons can be streamed on Hulu Plus and Netflix. Season 4 is available exclusively from Netflix.
Posted by scriptipps at 12:00 PM