For its first several decades, television was often derided as “radio with pictures.” Whereas motion pictures began as a purely visual medium with no dialogue at all, the boob tube had built upon Marconi’s wireless audio contraption by adding images. “Viewing” habits evolved slowly. The earliest shows, which had begun on radio, were designed and structured non-visually. The viewer could almost always follow the action without looking at the screen.

Take a look at the now-classic teaser in Breaking Bad’s 2008 pilot, for example. Landscape shots establish the desert location. A pair of pants drifting in the breeze against a blue sky sets up the first in a series of questions that completely hooks the audience: Whose pants are those? This guy? Why isn’t he wearing his pants? Where is he driving to in such a hurry? Why is he wearing a gas mask? What’s with the bodies rolling around on the floor of the camper? Why does this everyman have a gun tucked into the waistband of his undies? 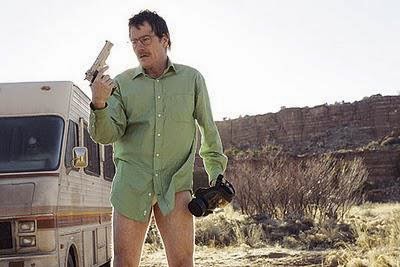 The only dialogue in the sequence comes when Walter White records a video for his family. As he himself says, it’s not a confession. The only exposition the dialogue gives us is his name, address, and his family’s names. The real purpose of the dialogue is to expose the protagonist’s emotional state of mind, to make us aware that his life is other than what we are seeing. Because what we see is what dictates the story here.

After the opening credits, we jump back three weeks and begin to learn about our hero’s “normal” life through more wordless visuals. The décor of his home, spelled out extensively in the script, tells us his socioeconomic status. We see him in bed with his wife, waking up before her to work out in a room that is clearly being converted into a nursery, signaling that they are expecting a new baby. Finally, we see a plaque on the wall showing that Walt is a Nobel laureate.

Not only have we learned a lot more about Walt through the visuals in this sequence, but the contradiction between the images here and in the teaser sets up a major conflict. With virtually no dialogue, we’re dying to know how in the world this respectable, middle-class family man became the crazed, gun-toting man we saw naked in the desert in the space of just three weeks. 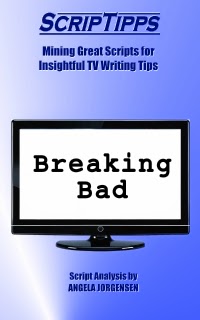 Find dozens of useful tips to help make your screenwriting (for features or television) more compelling in ScripTipps: Breaking Bad, Angela Jorgensen’s in-depth, scene-by-scene deconstruction of Vince Gilligan’s groundbreaking pilot script for one of the most acclaimed shows of television’s new Golden Age.

Posted by scriptipps at 8:30 AM