Every script is perfect until someone else reads it. It’s important to put your script in front of your peers to see what they say about it. Writers groups are a useful tool for that, but keep in mind that most of the other writers in your group haven't sold any screenplays either. In fact, you’re likely to learn more about how to improve your writing by seeing the mistakes in their screenplays than from the notes they give you on yours.

That's partly because most people don't know how to give useful feedback, or how to process the feedback they receive. Focusing equally on both sides of the equation, Toxic Feedback: Helping Writers Survive and Thrive by Joni Cole solves that problem. Although written with prose authors in mind, the book’s revelations also apply to screenwriting groups. 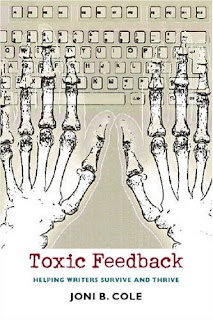 What does Cole mean by “toxic” feedback? If you tell a person they’re a bad driver, they probably won’t agonize about whether to turn in their driver’s license. But tell someone their writing just isn’t there yet and they may abandon the project you read, or even quit writing altogether. Writers care what people think of their writing. Providing feedback is very powerful.

Cole gives great examples of common types of criticism, followed by tips on how to turn negative feedback into teachable moments. But the bigger eye-opener of this book is the advice on interpreting feedback.

According to Cole, 14% of all feedback is dead-on. You know it in your gut the minute you hear it. You were probably thinking it subconsciously already and you just needed to hear it out loud.

Another 18% percent of the feedback you receive is “from another planet.” It could be because of the feedback provider’s personal bias; they insist on a happy boy-gets-girl ending even though the author’s clear intent was boy-gets-boy. Or they insist you follow some obscure formatting rule that you know is antiquated. These notes can be disregarded without another thought.

The remaining 68% fall somewhere in between. You'll consider each of these notes on a case-by-case basis, weigh them heavier if there was a consensus from the group, and make the decision whether to make the change or leave it alone.

It’s important to note that Cole’s theories leave you empowered with that decision. You’re the boss of your story, not the feedback provider. Try out the suggestions, but go with your gut about whether the change makes your script better or worse. Don’t simply go down the list and make every revision proposed to try to make everyone like it, because writing by committee won’t work.

And if you decide not to take a note, it doesn’t make you any more stubborn than the feedback provider who stubbornly holds that their notes were “right.”

Whether you give or receive, if you’re involved in the writing-feedback process, reading Toxic Feedback is highly recommended.

(A version of this post was first published on Five Sprockets on June 25, 2012.)