Every scene in a movie needs conflict. Not just the big, action-y beats where the hero dukes it out with the bad guy, but the talking heads scene between two best friends as well. Just because two characters in a screenplay are best friends doesn’t mean they agree on everything. In fact, if they do, it will seem like the best friend character is only there to give the hero someone to talk to as they spout the exposition the writer wants the audience to know.

So how does conflict work among characters who are on the same side and are supposed to be getting along? Let’s take a look at Callie Khouri’s 1991 Oscar-winning debut script, Thelma & Louise, about two gal pals who set off on a road trip and always have each other’s back when the shit hits the fan, as an example. (SPOILER ALERT: This discussion will reveal plot details of the film.)

The titular women are already longtime besties when we first meet them, but they have completely different worldviews, especially where men are concerned. Louise (Susan Sarandon) has been burned by men, knows not to trust them, and does not want them interfering with her girls-night-out weekend at the lake. Thelma (Geena Davis) has only ever been with one man—to whom she is unhappily married—and longs for a small taste of sexual freedom just once in her life. These contrasting character traits inform their conflicts.

Right from the start Louise argues with Thelma that they won’t be needing the lantern—or the gun—that Thelma has brought. Still barely out of town, Thelma wants to stop and have some fun on the way to the lake. Louise does not. More conflict. Thelma wants to drink and dance. Louise warns her not to get into any trouble. Thelma doesn’t listen and gets herself into real trouble out in the parking lot. Louise has to rescue her by shooting Harlan (Timothy Carhart), setting both ladies on the lam. If they didn’t have the gun or stop for drinks or dance with Harlan, the rest of the movie couldn’t happen. 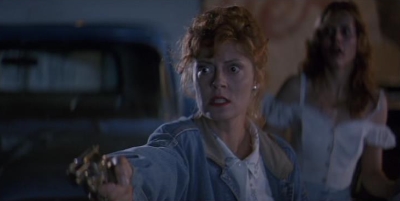 Later, Thelma wants to pick up J.D. (Brad Pitt). Louise doesn’t think it’s such a good idea. Thelma gets her way and J.D. steals Louise’s money. A setback for both of them. They’re in this mess together, but they got there through conflicting goals and attitudes every step of the way. As Detective Hal Slocumb (Harvey Keitel) points out to J.D., if he hadn’t taken their money, their crime spree wouldn’t have begun spiraling out of control in the very next scene. A difference of opinion—about stopping to get laid—tied to the defining contrasts of these two main buddy characters, has again resulted in a consequence that forces the plot into yet another new direction.

From this point on, Thelma takes control, but the pair remain very distinct characters. Thelma robs a liquor store while Louise waits in the car, unaware. Thelma forces Louise to confront a dark, repressed memory. Thelma gets them away from a cop who pulls them over for speeding after Louise has run out of ideas. And Louise is the one who slips and lets the FBI find them, while Thelma wonders if Louise is considering giving up.

Each protagonist has her own distinct arc. Thelma begins as a sheltered idealist, while Louise is a hardened realist. By the end of the picture, the BFFs are square on the same page. They make their final—and hardest—decision together, in absolute unity.

ScripTipps TIP: Buddy characters should have fundamentally opposite qualities, like Oscar and Felix.

ScripTipps TIP: Imbue every scene with conflict that grows naturally from your characters’ differences.

ScripTipps TIP: Use a little conflict to enliven a talking heads scene among best friends who are always on each other’s side.

ScripTipps TIP: Use a hint of conflict to underline the consequences that will end up moving the plot in a new direction.

ScripTipps TIP: In a two-hander, give each protagonist her own distinct arc that couldn’t exist without the actions of both of them.

ScripTipps TIP: Buddy characters start out as opposites but end up on the same page after each has gone through some transformation.

ScripTipps TIP: Don’t let a supporting character exist just to give the hero someone to talk to for the sake of delivering exposition.

ScripTipps TIP: Make things happen where if they didn’t, the rest of the story wouldn’t happen.

(A version of this post was first published on Five Sprockets on July 19, 2010.)