Logline: Four senior citizens who have been friends since childhood reunite in Las Vegas for a bachelor party.

The October 5, 2010 draft, reviewed by ScriptShadow on Jan 17, 2011, which may be significantly different from the finished film, opens with a prologue establishing the four main characters' friendship as teenagers hanging out on the neighborhood streets in 1961. The scene contains the slightest whiff of a love triangle, but for the most part, is built primarily around the gang sending off one of the four to go fight in Vietnam. The rest of the movie takes place in present day and the veteran's adventures in Vietnam play no role in the story whatsoever.


Compare this with the similar prologue in Clint Eastwood's MYSTIC RIVER: 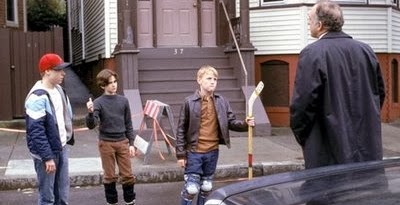 Here we also meet the main characters as young boys playing in the street. Not unlike the young man going off to war in Last Vegas, this opening scene is all about one of the boys getting into a car with a stranger and being taken away. What happens to him as a result of getting in the car affects everything that happens to all three of the characters for the rest of their lives, including the tragic events of the present-day plot. The entire story hinges on what happens in the prologue. It's absolutely necessary. Without it, the rest of the movie wouldn't make sense.

By contrast, you can come in late from the popcorn line, completely missing the opening goodbye scene in Last Vegas with the boy going off to war, and it will not affect the way you experience any other scene in the movie. Reading a disconnected opening scene like this in a screenplay makes you feel you are not in the hands of a good storyteller.

ScripTipps TIP: Write a prologue in a screenplay only if the events of the scene really matter to the story.

ScripTipps TIP: Start a screenplay with the event which, if it did not occur, the rest of the story would not happen.

In Last Vegas, BILLY (Michael Douglas) is wealthy, has a girlfriend half his age, and has never been married. PADDY (Robert De Niro) is grieving the recent death of his childhood sweetheart and wife of fifty years, Sophie. The central conflict in the story is that Paddy is mad at Billy for not attending Sophie's funeral.

ARCHIE (Morgan Freeman) lives with his son's family. They won't let him have any fun because he's old and might forget to take his pills. SAM (Kevin Kline) is unhappily married, retired, and bored in Boca Raton. Recognizing his unhappiness, his wife gives him a condom, a Viagra, and permission to cheat to thank him for putting up with an old hag like her for all these years.

The four men get to Vegas, bicker, take their meds, get up in the middle of the night to pee, judge a wet T-shirt contest, fight, make up, and resolve all their problems. FADE OUT.


Compare this to THE HANGOVER: 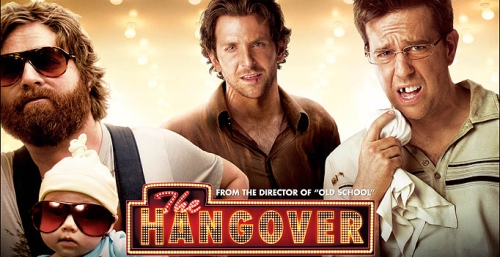 Three best friends and an unwanted tag-along black out at a wild Las Vegas bachelor party and lose the groom. They have mere hours to piece together the parts of the night they can't remember so they can find their friend and get him to the church on time.

The differences are more than just the 140 years of the combined ages of the two casts.

Comedy, like drama, comes from conflict. In The Hangover, Phil wants to let loose while Stu worries about jeopardizing his relationship with his girlfriend. Conflict. And Alan is just strange, a wild card thrown into the mix. Phil and Stu are stuck with him the way Oscar is with Felix, or De Niro is with Charles Grodin in Midnight Run (directed by Martin Brest, who also made the geezer bank robbery comedy Going in Style).

In Last Vegas, each of the characters has his own arc, but they don't oppose each other, except for Paddy, who gripes about not wanting to be there at all, which isn't as intrinsically funny as others not wanting him there. They've all been friends for 50 years. There's very little conflict, with the small exception of this minor spat between Billy and Paddy that can probably be patched up with a simple conversation and a hug. There are no stakes.

ScripTipps TIP: Characters who get along with each other are boring. Inject conflict into your screenplay by sticking your hero with a new, unwanted "frenemy."

Both movies have a wedding looming in the third act, but The Hangover has a mystery to solve as the clock ticks or the wedding won't happen. Both movies have comic set pieces, but the ones in The Hangover are in service of a plot, while the ones in Last Vegas are in service of humorously juxtaposing old men in a Las Vegas setting to get enough laughs to fill a trailer. There is no no nightmarish outcome that will befall them if they don't accomplish a goal.

ScripTipps TIP: Get your hero to the hook, then have something happen to him there.

ScripTipps TIP: The more unpredictable a story is, the more fun it is to follow.

The Hangover made overnight stars of its relatively unknown cast. Last Vegas depends on stars to draw an audience who wants to see nothing more than four great actors of advanced age in a premise.

For a more in-depth analysis of the Las Vegas bachelor party screenplay that became an unexpected $277 million smash and spawned two sequels, read ScripTipps: The Hangover, loaded with useful and insightful tips to make your screenplay shine! 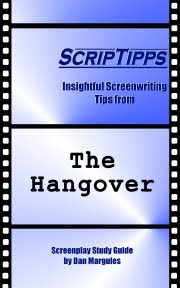 Related article: The Hangover ScripTipps
Posted by scriptipps at 12:00 PM