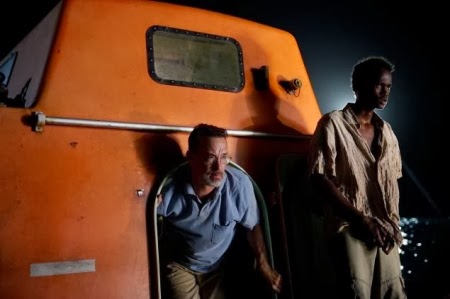 The hit film CAPTAIN PHILLIPS (now playing) retells the true story of a harrowing 2009 Somali pirate attack on an American cargo ship and the thrilling rescue of her captain by the U.S. Navy SEALs. Tom Hanks stars as the titular captain who becomes a hostage on a small lifeboat the pirates try to use for their getaway.

Hanks may very well earn his third Oscar, thanks to the much-talked-about emotional catharsis at the end of the film which, it turns out, was not in the script by The Hunger Games screenwriter Billy Ray (Shattered Glass).

Not having read the screenplay, there was a different scene I would have guessed had not been part of the initial drafts. At one point, Phillips leaps out of the lifeboat in a daring escape attempt. It's an exciting, unexpected, danger-filled moment. But ultimately, he ends up right back where he started. The sequence delivers thrills, but accomplishes nothing story-wise, like a musical stopping for a song, or the Wolfpack in The Hangover taking a complete detour from the plot to return an angry tiger to its owner.

Captain Phillips is the protagonist, or "hero," of the movie. For the second half of the movie, this hero is mostly an immobile hostage. He takes a back seat while the Navy swoops in and rescues him, as dictated by the facts of the real-life events. His hands are tied, literally. The hero doesn't get to participate in solving his problem.

In this situation, it would make perfect sense to insert an action beat into the story to let the star act heroically, even if the end result must put him back into position for some other force to take the final steps in saving him.

ScripTipps TIP: In a story that demands someone else save the hero, give the hero a moment of his own to act heroically before putting him back into position for the final climax.

ScripTipps TIP: Set pieces sometimes can be inserted or removed from a script without affecting the plot, like songs in a musical.

As it turns out, a quick perusal of the book A Captain's Duty, the source material for the screenplay, shows the underwater set piece really did happen so it most likely did appear in every draft of the script. Nevertheless, it presents a useful screenwriting lesson (dictated by life, in this case) in writing an active, heroic hero.