Every scene in a screenplay should have conflict. That doesn't mean every scene needs a knock-down, drag-out fisticuffs or shootout. But how else do we show conflict visually, without relying on some dialogue-heavy, verbal shouting match?

Here is a scene from Brian De Palma's CARRIE (1976). The scene contains no dialogue, very little movement, and almost no interaction between the two actors. Yet, clearly we can see two opposing emotions at play. 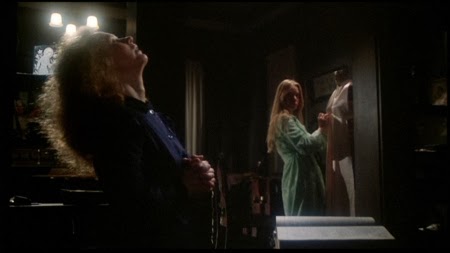 This brief scene occurs shortly after the film's midpoint. Carrie has just defied her mother for the first time in her life. She has decided she will go to the prom, against her mother's wishes, then revealed her telekinetic powers to demonstrate precisely how she intends to enforce this shift in power. "Things are gonna change around here," Carrie says.

Moments later, we see this shot of Margaret praying in the foreground, juxtaposed with Carrie sewing her prom dress in the background. This is a reversal of an earlier scene where Margaret sat at her sewing machine while she forced Carrie to pray in a closet.

Carrie's action here represents her anticipation of the dance. Her mother's opposing action shows fear of what will happen at that same dance. The scene shows two characters with conflicting points of view on the same subject without dialogue or movement. Their actions are at odds with each other, in the same frame.

ScripTipps TIP: An event often occurs at a screenplay's midpoint that changes the balance of power between the hero and villain.

ScripTipps TIP: Write a reversal scene that turns the tables on two characters' positions from an earlier scene.

ScripTipps TIP: Conflict can be shown visually, even in a scene with no dialogue and very little movement.

For more screenwriting tips like these, check out ScripTipps: Carrie or any of the ScripTipps scene-by-scene screenplay analysis ebooks today.