Where to Learn to Write Biopics Like Scott Alexander & Larry Karaszewski 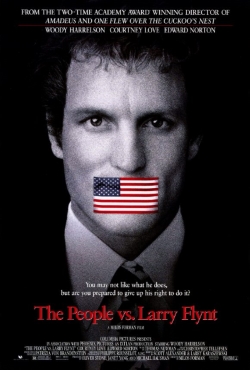 Audio commentaries on DVDs allow us to sit down and watch a favorite movie with the film’s director or star as if they were in our living room telling us what went into each shot. Sometimes, they can be a virtual film school on a small silver platter. Too often, however, they are filled with two hours of back-patting and silly reminders that we shouldn’t be watching the movie for the first time with the commentary track on because it may contain spoilers.

Rarely is a screenwriter allowed to contribute to a yak track, unless he or she also happens to be the film’s director and/or star. One notable exception worth a listen is the Special Edition of Milos Forman’s The People vs. Larry Flynt (1996), with scribes  SCOTT ALEXANDER & LARRY KARASZEWSKI on hand to guide us through their Golden Globe and WGA award winning screenplay as it plays out on the screen, scene by scene. The result is a master’s level class on how to write biopics from the guys who also brought us Ed Wood, Man on the Moon, and American Crime Story: The People vs. O.J. Simpson. 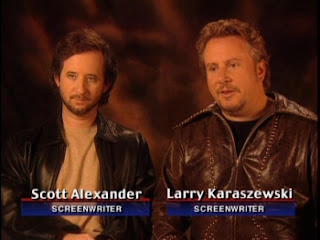 What’s their secret to getting films greenlit with such oddball protagonists as the world’s worst movie director, an anti-humor comic performance artist, and a sleazy pornographer? Their scripts follow the same rules laid out in every screenwriting book on the market. As the film unspools, Scott & Larry point out the page 10 inciting incident -- Flynt starting his magazine -- followed by all the necessary plot points in all the expected places -- the hero is arrested on page 30, gets shot on page 60, and gets sued by Jerry Falwell on page 90.

We also get many great examples of why and how to composite characters and events in order to meet the demands of condensing a person’s life into two hours and three acts. Anyone who has ever complained about a factual inaccuracy in a movie like this (for instance, Edward Norton’s character was not gunned down with Flynt in real life) needs to listen to this commentary to understand why these “mistakes” make it all the way into the final cut. Ironically, the writers did such a convincing job fictionalizing elements of the story that Flynt’s own autobiography ended up inadvertently including things Scott & Larry had made up for the movie. 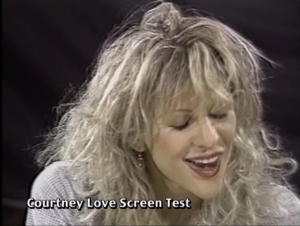 The film’s stars get a separate track of their own, on which Courtney Love offers such valuable insight as, “Jesus, I was so skinny!” and, “My boobs are in this quite a lot,” and “I can’t talk over [Edward] Norton’s acting cause he’s too good.” Great. Then what are we listening to you for?

(A version of this post was first published on Five Sprockets on March 23, 2009.)