What Do The Bad News Bears Want? 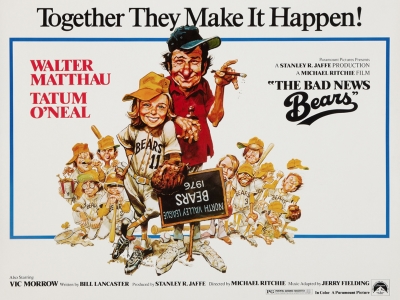 In honor of the 40th anniversary of the release of The Bad News Bears, Rolling Stone listed nine reasons it’s the greatest baseball movie ever made. While the film is remembered mostly for a bunch of foul-mouthed little leaguers, the WGA award-winning screenplay by Bill Lancaster (The Thing) is an excellent example of a protagonist with a clearly defined arc.

When we first meet reluctant coach BUTTERMAKER (Walter Matthau), he’s only in it for the money. He may be there for the wrong reasons, but at least he's there. “None of the fathers have the time for it,” notes COUNCILMAN WHITEWOOD, the man paying him, who happens to be one of those too-busy fathers. “I think we’re doing a really fine thing,” he adds, as Buttermaker reminds him to sign the check.

Throughout the first act, Buttermaker would rather be working at his dead-end day job cleaning swimming pools than coaching a bunch of kids. He can’t be bothered to learn their names, he jokes about murdering one of them, he balks at having to get them uniforms, and he passes out on the mound the day before the opening game.

The baseball season begins, but the second act can’t start until Buttermaker decides to change his attitude. He watches dispassionately as his team gets clobbered. When he does start to show a little concern, one of the kids tells him to “get back to your beer.” Being told off by a ten-year-old hits him. He decides to forfeit the game, not because he’s quitting, but because he’s come up with a new strategy: Trying. 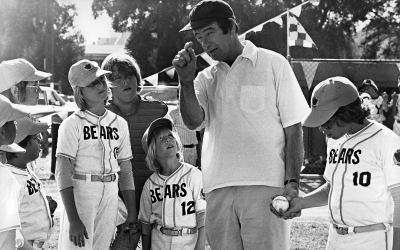 Buttermaker marches into the second act ready to reboot the gig. The first order of business is to talk one of the humiliated players off the ledge (of a tree). Next, when Whitewood decides to disband the team, Buttermaker refuses his severance check and talks the kids out of quitting.

He even puts down his beer long enough to try to convince AMANDA (Tatum O’Neal), a young girl he once taught to pitch when he was dating her mother, to join the team as a ringer. He fails to persuade her at first, but their relationship is the equivalent of the romantic B-story subplot that is often introduced at the beginning of the second act. Only here it’s a father(-figure)-daughter love story. 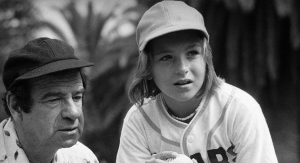 The Bears lose their second game, but at least they finish it this time. A big improvement. Buttermaker succeeds in recruiting Amanda and, although the Bears still lose, she almost pitches a no-hitter. Things are definitely looking up. At the midpoint, they add juvenile delinquent KELLY LEAK (Jackie Earle Haley) to the lineup as another ringer. Leak gives them their first win, tranforming Buttermaker from a coach into a monster.

According to Wendell Wellman’s excellent book A Writer’s Roadmap, the first act of a screenplay represents the hero’s argument, the second act is his opponent’s argument, and the third is the author’s. We first meet ROY TURNER (Vic Morrow), the coach of the Bears’ primary competition, in the very second scene of the movie, when he tells Buttermaker, “We put on a highly competitive program here. It’s not us. It’s the boys. [They] want it that way.”

What the boys want will become the film’s central question. For Buttermaker, the answer, as shown in the first act, is “who cares?” When Whitewood wants to shut them down, Buttermaker asks, “What if the boys don’t want to quit,” to which the councilman replies, “That’s not important.” When the boys themselves vote to quit, Buttermaker asks if that’s what they really want. “I wanna play ball,” one of them responds. But Buttermaker tells Turner he wants to win the pennant.

Buttermaker’s want does not correspond with the boys’ want. This leads to serious trouble in the second half of the second act.

The Bears keep winning until they have just one more game they must win in order to challenge their enemies, Turner’s team, for the pennant. It’s so important to them, thinks our hero, that he must pull out all the stops. He barks orders at all the kids – “I give you an order, I expect you to follow it!” – and even blows up at Amanda when she tries to reconcile her father-figure with her mother – “Can’t you get it through your thick head I don’t want your company?” – proving that there is crying in baseball and destroying the “romantic” B-story subplot in the process. 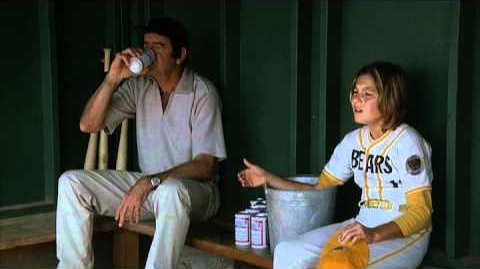 Buttermaker has adopted his opponent’s argument: It’s all about winning; that’s what the kids want. He has become his enemy. Now the two teams and the two coaches will face each other in the final showdown of the season, also known as the third act.

In the playoffs, Buttermaker had secretly ordered Kelly, their best player, to cover for all the other fielders. The rest of the team felt left out, because, well, they wanted to play too. Just before the final game starts, the boys, who have been taking their frustrations out on Kelly, find out it was all the coach’s plan and ask him why.

“What do you mean, ‘Why?’ We’re in the championship, aren’t we? Well that’s what you wanted, wasn’t it?”

The game begins and it’s filled with violence on the field and shouting matches between the adult coaches and umpires. Is this what anybody wanted?

Again, Buttermaker erupts at his players: “Next time I tell you to do something, you goddamn do it or else you’re off the team! Don’t you want to beat those bastards?” He’s met with stares of hurt, confusion, and fear. After a long beat, he tells them to get back out there and “do the best you can.”

The hero has just seen the error of his ways, but his enemy has not. Turner smacks his pitcher, who happens to be his own son, in front of everyone for not obeying orders. The son retaliates by intentionally letting the Bears score a run, then walking off the field.

Our hero would have ended up experiencing a similarly ugly display on his side of the fence if he had not seen the light. Instead, he adopts the screenwriter’s argument that, “Everybody on my team gets a chance to play.” They actually have a shot at winning, but Buttermaker decides to put in the worst players because they haven’t played yet. And he knows they really want to. And he cares. Win or lose, he’s come a long way from the opening scene of the movie. 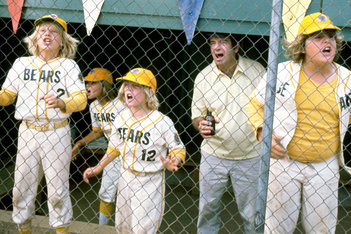 But his final action is questioned by the very man who put him in this position to begin with. Councilman Whitewood originally had to sue the league to make room for a team of misfits that included his son. On opening day he told the crowd, “What I want is to see every boy in America out on the baseball field playing the great game of baseball.” Now he only wants them to win, even if it means some of them don’t get to play. He orders Buttermaker to bench the bad players and put Amanda and Kelly back in. Buttermaker refuses and the rest is history.

In a very close game, the Bears lose. The filmmakers shot and tested an alternate version where the Bears won. With that ending, the film would have been saying that letting all the kids play is one thing, but they would not have been truly happy unless they won. In contrast, the original ending shows the losing team cheering and spraying each other with beer. They still care about winning and are upset that they lost, but their coach has gone on a journey that has clearly made them the happiest kids on the field. 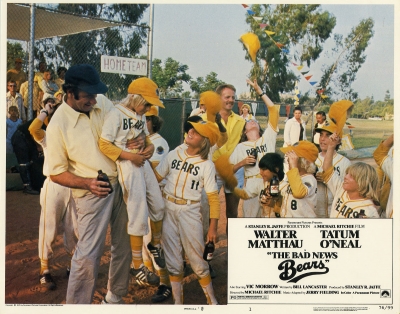 The father-daughter subplot is repaired at the end as well. In the midst of celebrating their loss, Buttermaker and Amanda hint at a future together next season (though neither actor returned for the sequel).

ScripTipps TIP: The hero’s attitude shifts in each of a screenplay’s three acts.

ScripTipps TIP: Know what your characters want, and show how and why that want changes as their journey progresses.

ScripTipps TIP: The hero and the villain often have a lot in common. The villain is the undesirable version of the hero that the hero might become if he doesn’t learn anything on his journey.